In May I finally gave some middle class white dudes a break. Finally! I am a hero, nobody ever reads books by those guys.

I finished 4 books in May, two by men and the two by the same white woman. All hereto cis able bodied writing about hetero cis able bodied white people. Three fantasy novels, one non fiction. And yes, I am starting to see that merely cataloguing what I’m doing is not necessarily enough to change it. Recommendations gratefully accepted in the arena of fun fantasy romps or other accessible genre fiction I can yomp through on my phone whilst breastfeeding a ratty infant to sleep.

This book is all about social media shaming. Ronson interviews several people who have been impacted by social media shaming to find out what happened next – so there’s a guy that plagiarised, a woman who made a tasteless joke, and that type of thing. He looks into the mob mentality that takes over in a Twitter storm and a bit about the history of public shaming, but I think there’s quite a large omission here in that Ronson doesn’t really talk about how social media gives voice to the voiceless. His focus is ‘this is really horrible and it ruins lives’ which is true, but I think there’s more to it than that. He touches on the sexism inherent in social shaming (women are treated v differently than men) but doesn’t mention race or any other intersections. I feel like it was odd to write a book about call out culture online and not talk to anyone from Black Twitter for example. So for me it was an interesting read but perhaps not the full story.

The difficult middle book of the Grisha trilogy picks up quite soon after the point where Shadow and Bone left off. It sees Alina’s power grow and her relationship with Mal change, and introduces some fun new characters as well as making the Darkling even more goff. Without wishing to give too much away, the way Alina develops all makes sense for her but also really highlights for me the fact I am in my thirties and have somewhat different relationship goals than in my teens. ANYWAY, there’s a fair amount of character dev and angst awaiting you here but also some rollicking adventure bits and you’ll want to read book three straight after cause the ending is good.

RuPaul has completely ruined the concept of a firebird for me. From time to time queens turn up on the Drag Race runway in Phoenix costumes and Ru always refers to these as ‘fire bird’, presumably thinking viewers won’t get it? Anyway. Ruin and Rising sees Alina up against it. That pesky Darkling really is a cad. She’s come into her own and made some pretty damn great friends along the way, but can she beat him? Or will she join him? After all he’s the only one with the power to understand her… I mean look, you know the answer to this before the trilogy even begins, but it’s a fun ride all the same.

I think this was first recommended to me in 2011 when I was writing my 12 books in 12 months and asking for fantasy recs, but it’s a bit of a beefy old tome and no way would I have had space to read it back then. Which is probably just as well since it’s one of those pacey, expertly plotted jobs that would probably have made me despair of my own crappy writing efforts if I’d read it whilst actively working on my own thing. It follows the exploits of the Gentlemen Bastards, a likeable gang of thieves who semi-Robin Hood the nobility of a city called Camorr, until they get caught up in an altogether darker plot. It has humour and darkness, wit and world building, and is technically very good. Missing the love triangle aspect of your YA fantasy faves but you can’t have everything.

At the start of the month a post from Lorna at Gin & Lemonade informed me May is ‘story a day’ month so I wrote a few bits and pieces to mark that. I didn’t manage every day – only 6 days actually – but it was more than nothing. I also thought very hard about submitting something to the Bridport Prize but ultimately didn’t feel like I had a story worth the £12 submission fee.

In May the baby figured out how to crawl backwards only (much to his annoyance) and cut his first tooth. We also had several lunches with pals in Leith (hooray for bank holidays) and visited Lochleven, Seton Collegiate Church and Prestongrange Industrial Heritage Museum. 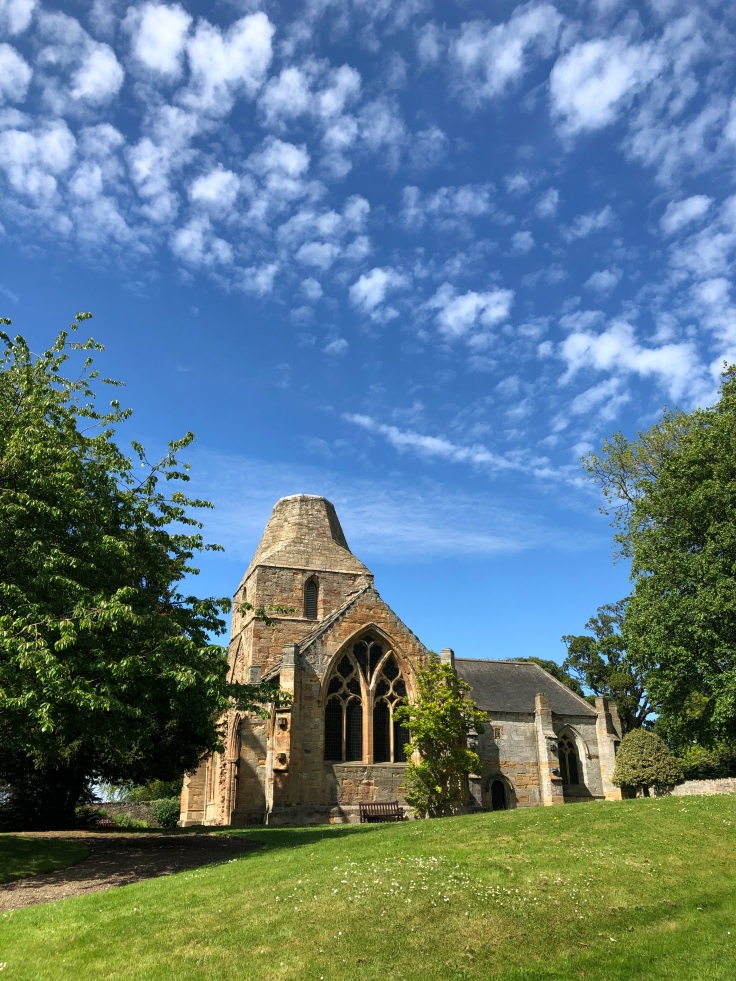 To mark our anniversary, we enlisted a cabal of babysitters so we could go out together for two days in a row – this involved having our first meal alone together since last summer (Thai food in Edinburgh) and a trip to the pictures to see Endgame (good fun popcorn film).

In May we also went on a long weekend to the Isle of Arran. I’d never been before but it’s a beautiful place to spend a few days and I’d definitely go back again. This was the view from the place where we were staying. Not too shabby.

May was, in summary, a veritable whirlwind of non writing activity.