I’m not really interested in Valentine’s Day. However, it is a time of year which brings out a lot of mush on the internet, particularly mush that draws on books. Books are, as you may already know, my bag. Having said that, Dear Reader, I find the complete absence of context contextualising some of these quotes quite galling.

Take, for instance, this list compiled by the delightful people at Goodreads of ‘7 Romantic Book Lines to Fall in Love with This Valentine’s Day’. These were picked by members of the public who – as recent news events have surely made abundantly clear – cannot be trusted with even the simplest of tasks.

Even so, 379 people have liked this blog post, with a further 840 likes (or indeed loves) the last time Goodreads shared it on Facebook. I’ve only read four of the books on the list, and of these context renders two in particular considerably less romantic. Spoilers are forthcoming, peeps. For books you’ve had 200 years to read though, so y’know, #sorrynotsorry.

“Whatever our souls are made of, his and mine are the same.”

If you image search this you can find it on cards, jewellery, tattoos, and pictures of Harry Styles out of the One Directions. It’s presented in looping handwriting across sunsets, used as part of wedding décor, and reblogged by countless lovestruck tumblr-ers.

You don’t very often see the rest of the quote, which goes:

“He shall never know I love him and that, not because he’s handsome, but because he’s more myself than I am. Whatever our souls are made of, his and mine are the same.”

He – Heathcliff – shall never know she loves him not because it’s a forbidden love, or an unrequited one, or because he tragically dies before Cathy can tell him. No, the reasoning for this is because she arbitrarily decides not to tell him. Well, I say arbitrarily – it’s largely because she’s a snob. They then proceed to marry other people pretty much to spite one another, and make those unsuspecting spouses (and subsequent offspring) all thoroughly miserable in the process. WOO, ROMANCE.

If you were madly in love with someone, why would you intentionally drive them crazy by making sure they can never have you? Similarly, following up this dick move by coming back to haunt them (possibly) isn’t romantic, it’s bloody selfish.

By the way, if you haven’t already read Kate Beaton’s take on Wuthering Heights I heartily recommend it.

Exhibit B, Pride and Prejudice.

“In vain I have struggled. It will not do. My feelings will not be repressed. You must allow me to tell you how ardently I admire and love you.” 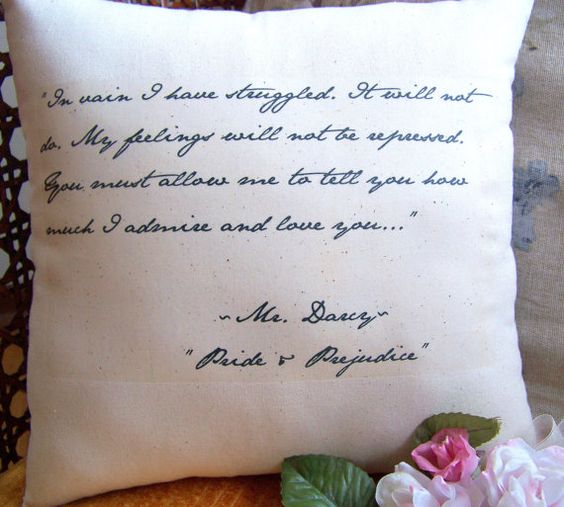 Now, it is fairly well documented that I love a bit of Pride and Prej. And I think that in the end, Mr Darcy takes some quite romantic actions (i.e. saving the sister and family reputation of the person he loves even after being thoroughly rejected). But in context, this particular quote is the most cringeworthy thing ever.

Literally seconds after claiming to love her, Darcy proceeds to wang on at considerable length about Elizabeth’s inferiority, her terrible family, and the fact he’s done everything he can to talk himself out of liking her. When she points out, pretty reasonably it must be said, what a crappy proposal this is, he’s shocked and annoyed because somehow he thought she’d fall at his feet for deigning to consider her. That’s not romantic – it’s entitled and awful. The only way he rescues it is by listening to her response, admitting he is at fault, and trying to make amends. That is quite romantic. Or y’know, the bare minimum of what you should be looking for in a romantic partner (which in itself is quite radical in a romance novel).

I suppose his later declaration, ‘My affections and wishes are unchanged; but one word from you will silence me on this subject for ever’ isn’t your traditional Hallmark card – but what a good sentiment for Valentine’s Day in 2017. He’s listened, he’s apologised, he’s hoping she feels differently now that they’ve got to know one another a bit more. If not? He’ll take it. No means no. You gots to respect that.

In a world of post truth, alternative facts, and other such phrases, people are increasingly taking things out of context and it’s probably naive to assume treatment of classic literature should be any different. Still, I think it’s worth turning off the internet and reading something properly every once in a while.

And maybe, if Valentine’s Day is your bag and you’re buying a literary card for a loved one – think about reading the book first. Just to check you’re saying what you want to say.