Friends, today I made a huge mistake. I accidentally read a few comments on a piece of internet journalism, and now I feel compelled to blog about it like some sort of millennial trapped in a sustainably sourced jar of self righteousness. NB, I only learned last week that I’m technically young enough to be counted as a millennial. After some initial misgivings and five minutes of soul searching, I have fully embraced this status change and started a 12 books tumblr.

Anyway, if you’ve been on the internet today you will hopefully have noticed that it is March 8th – also known as International Women’s Day. The reason we’ve got one of those is to address the fact that throughout much of history, most of the days have belonged to the men. In spite of this, there is also an International Men’s Day (November 19th, as Richard Herring heroically spends every IWD telling people) so there’s no need to take umbrage about women getting a WHOLE DAY to themselves EVERY YEAR.

Except people do. Every. Single. Time. Ordinarily I ignore it, or roll my eyes, or get back in the kitchen and eat a pie. But today the Scotsman rebranded as the Scotswoman, and when reading their piece online about why they did it, I accidentally scrolled too far and then got moderately irritated.

Here are the first three comments.

I’m not going to bother dissecting why these comments are moronic. It’s presumably self evident to anyone reading a blog written by a straight white middle class cis woman on the subject of reading books and writing novels. Having said that, if you’re genuinely not sure what my problem is, feel free to drop me a comment and I’ll explain.

The thing that bothers me about this, apart from all of it, is actually the paragraph I just wrote. The paragraph where I say that if you’re reading this, you probably already understand why we need IWD, and feminism in general. Much like performing Upworthy style poetry or instagramming the merits of juicing, chances are the only audience properly paying attention are the ones who already understand. You’re preaching to the converted.

Or in my case, not preaching very much at all – because what’s the point in telling people what they already know?

I have two problems with preaching about stuff (whether it’s religion, equality, or kale). One is, I’ve been conditioned by years of sarcasm, so gooey eyed idealism about change, terrible metaphors for race and excitable political analogy mean I immediately want to take the piss. The second is that I know full well that the people who actually need to know The Things People Preach About – that feminism means gender equality, that FGM still happens in the UK, that books by women are consistently reviewed and published less frequently than those written by men – are not paying attention.

They’re not invited to the right Facebook events, they’re not reading the right opinion pieces, they aren’t on this blog, or even my sweet new tumblr. They’re leaving idiot comments on the Scotsman, or trolling female gamers on YouTube – or, and this goes for the vast majority – they’re just at home. Getting on with their lives away from the fug of lit salons, poetry events and impassioned support for NHS in the New Statesman. They’ve probably never even heard of intersectionality, much less had a crisis about how they’re going to be kicked out of feminism because their friends group isn’t diverse enough.

I’ve sort of curated a life away from such monsters, because in the age of the internet I can do that. It means that I can surround myself with people who share my values, political opinions, and most importantly my memes. 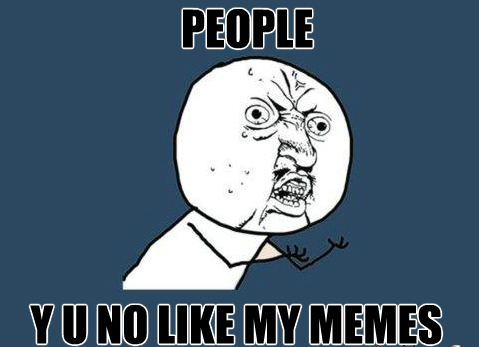 However, the fact I know that most people are normal also means I’m free to be an asshat about people who are like me, but have chosen to speak out about The Things mentioned above. I tell myself I can be an asshat because I am superior in my cape of self awareness – I know they’re doing this in the wrong place at the wrong time. I can watch someone stand up at a spoken word night and tell people that racism and sexism are bad, m’kay, and it’ll  make my teeth itch, and in my mind I’ll be saying ‘go tell that to schoolkids in Livingston for free!’ or ‘shouldn’t you be volunteering with the Red Cross with chat like that, instead of swanning about an Edinburgh coffee shop? Most real human people don’t give a crap about any of these issues – why don’t you do something that catches their attention? That’s how to make a difference!’

But I don’t tell them, because I don’t want to be preachy.

On days like this, when I accidentally read the comments, I become well aware of the outstanding hypocrisy of my internal monologue. I’m effectively Dylan Moran’s ‘fat fuck sitting on the couch shouting sports advice at the greatest athletes in the world’. I’m not adding to this debate by being passive aggressive about it, or by failing to suggest to these young radicals that they might want to channel their emotional outpourings at people who don’t already know and agree. I’m not helping anyone by reading up on stats about women in publishing and never telling anyone about them. They’re crap, by the way, and I could probably tell ‘normal’ people that in a non preachy way.

That is why, for this International Women’s Day, I am adding my voice to the many posts that have already been written. We’ve come a long way towards equality for women and men, but there is still a long way to go. Let’s be honest, that isn’t preaching – it’s just true.