This evening I am going along to a literary salon in Edinburgh to talk about 12 books in 12 months as part of a literary blog themed event.

I think this sounds rather grand for two reasons.

Then there’s me, struggling for weeks to get through Life of Pi but cheerfully staying up all night to read George R. R. Martin in a hostel in Ljbljana.

Intellectually I know the term ‘literary blogger’ is being used quite generally to describe people who write about books, and is not specific to people who Write About Books in a highbrow manner.  Even so, I can’t help feeling a wee bit fraudulent being described that way – not least because the other two speakers, Bethany from Subtle Melodrama and Cat from Canongate Books, write infinitely more sensibly about books than I do.

My battle with serious prose has been fairly extensively documented on this site.  I read and enjoy well written or literary work (up to a point anyway – sometimes it’s a pointless struggle – see Arlington Park by Rachel Cusk) but trying to write it or about it I either can’t think of much to say.  There’s only so often your review can be ‘it was very pretty writing, but nothing really happened.’

I don’t apologise for that attitude because I think there is room to poke fun at writing that takes itself too seriously, or that other people take too seriously. This is not because I’m a philistine, or because I don’t like talking about books – of course I do, or this site would never have happened.  However, I also think that sometimes people get so involved in talking about or analysing prose they forget to enjoy it.   This can also lead to a sense of competition, an idea that in order for a book to be worth reading at all it has to be hard to read or understand – reminiscent of that pal most of us has had who is obsessed with hearing bands before anyone else does and discarding them when they become popular.  This attitude leads down the path of pretention to the garden of searching ruthlessly for the subtext in everything that only you and a chosen few understand because you’re so incredibly clever and insightful. 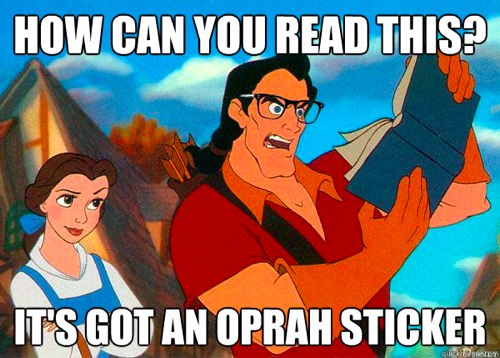 All of which is fine – whatever makes you happy.  However, it’s intimidating to readers who just want a good story or an interesting character, and constant in-depth analysis doesn’t always add value to the reading experience or even your understanding of the text.  I remember being told an anecdote by an English lecturer at university about the poet Seamus Heaney.  He’d done a talk or workshop or something, at the end of which a bunch of students and teachers enthusiastically told him all about the themes and hidden messages they had uncovered in his writing.  He apparently listened to all of their theories on his work, smiled and said ‘oh, is that what I meant?’

Subtext – if you don’t write it, someone else will read it in there.

Having said all that, I have it on good authority that litsalon will not require me to hold my own against people who love literature in an aggressively  academic manner, or are pushing the boundaries of French society by developing new philosophies.  I gather it’s more of a relaxed chat about books with like minded people – several of whom have done interviews or guest posts on this very blog, including event organiser Peggy.

I am really looking forward to it.