End of Books: The Return

“I’ve got an idea for your blog,” Bob said mysteriously at the office tea point one morning, “but I won’t tell you about it now, I’ll speak to you later.”

Then he vanished into the mist like he’d never been there at all.  Being as how I’m not much of a pre-10am person this was a little befuddling.  Why was our office so misty, and on a sunny day?  Still, an hour or two of putting together resource packs sorted me right out.  By the time he reappeared to expound on his idea, I was alert as a tack.

It came as a result of reading my post about the ‘End of Books?’ debate at the book festival a couple of weeks ago, he explained.  Some of you may remember that in said post I waxed lyrical about how paper books are the best thing evar, and only old people have kindles, like, people in their thirties and stuff.  Well hopefully my actual argument was a bit more eloquent, but that was the gist.  Bob’s suggestion was essentially to put my money where my mouth was.

“I have a kindle,” he said, “and I love it.  I haven’t read a paper book in months and the last time I went to a bookshop I got in there and thought, ‘why would I buy any of these?’.  Do you want to borrow it and see what you think?”

Naturally I accepted this challenge in the guise of a kind offer.  I’m pretty sure he doesn’t work for Amazon in his spare time or anything like that, so there’s no ulterior motive.  Unless there’s some kind of subconscious aversion to paper hidden in his past, and he’s now on a mission to get everyone in the world to read everything electronically so that paper becomes obsolete?  Take that, T’sai Lun (Chinese chap who may have invented paper around 105 AD)!

Doesn’t seem likely, doe it.  And so, the upshot of all this is that we are about to enter what you should all refer to as THE GREAT KINDLE CHALLENGE (incidentally, if you’re reading this aloud for some reason you should always shout that part out.  I don’t use caps lock lightly, my friends).

I don’t currently have any strong feelings against the kindle, incidentally.  I’ve seen them in passing and they look quite cool, and I can see the attraction in being able to take your library everywhere you go.  But on the other hand, these are all the books I’ve bought in the last few weeks, in spite of my having not enough time to read the books I’ve got already: 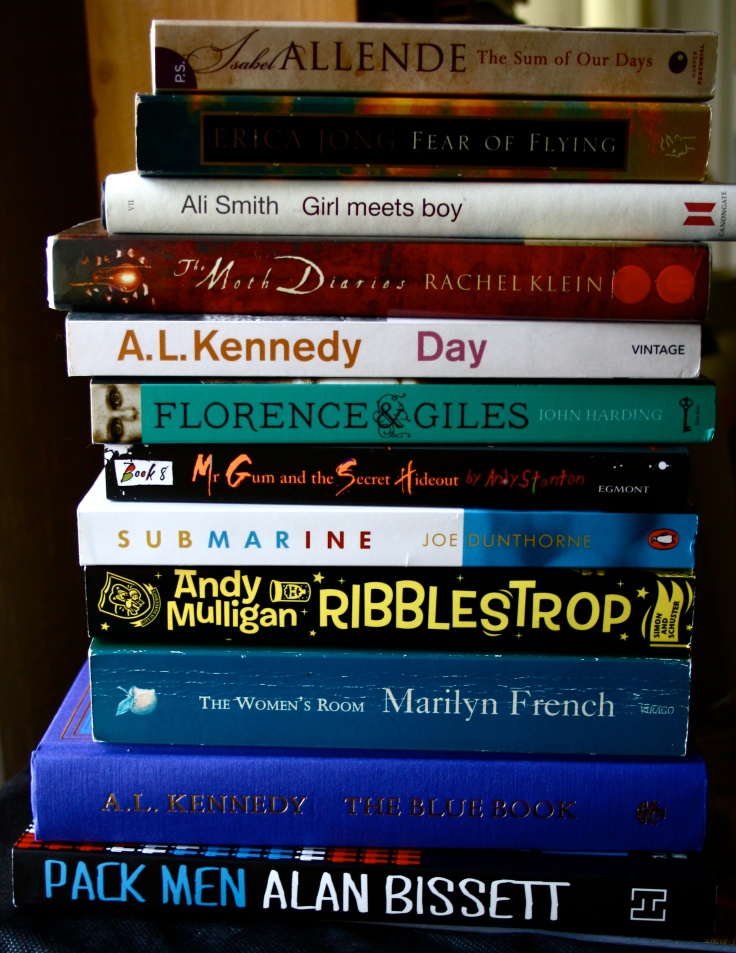 Aren’t they beautiful?  Particularly The Blue Book, which has tinted all the page edges blue too… Very pretty.

These are a mixture of purchases from the book festival shop, the internet, and charity shops.  Oh, and Fopp.  I never mean to buy any at all, yet I accumulate them wherever I go.  Books are the thing I am most likely to spend too much on or buy on impulse, far more than your traditional retail therapy of shoes or nail polish or whatever it is women are meant to get excited about.  I like the shape of them and the look of them, and that’s why I can’t envision the kindle taking their place in my heart.

However, there’s only one way to find out.  Let THE GREAT KINDLE CHALLENGE commence.

4 thoughts on “End of Books: The Return”