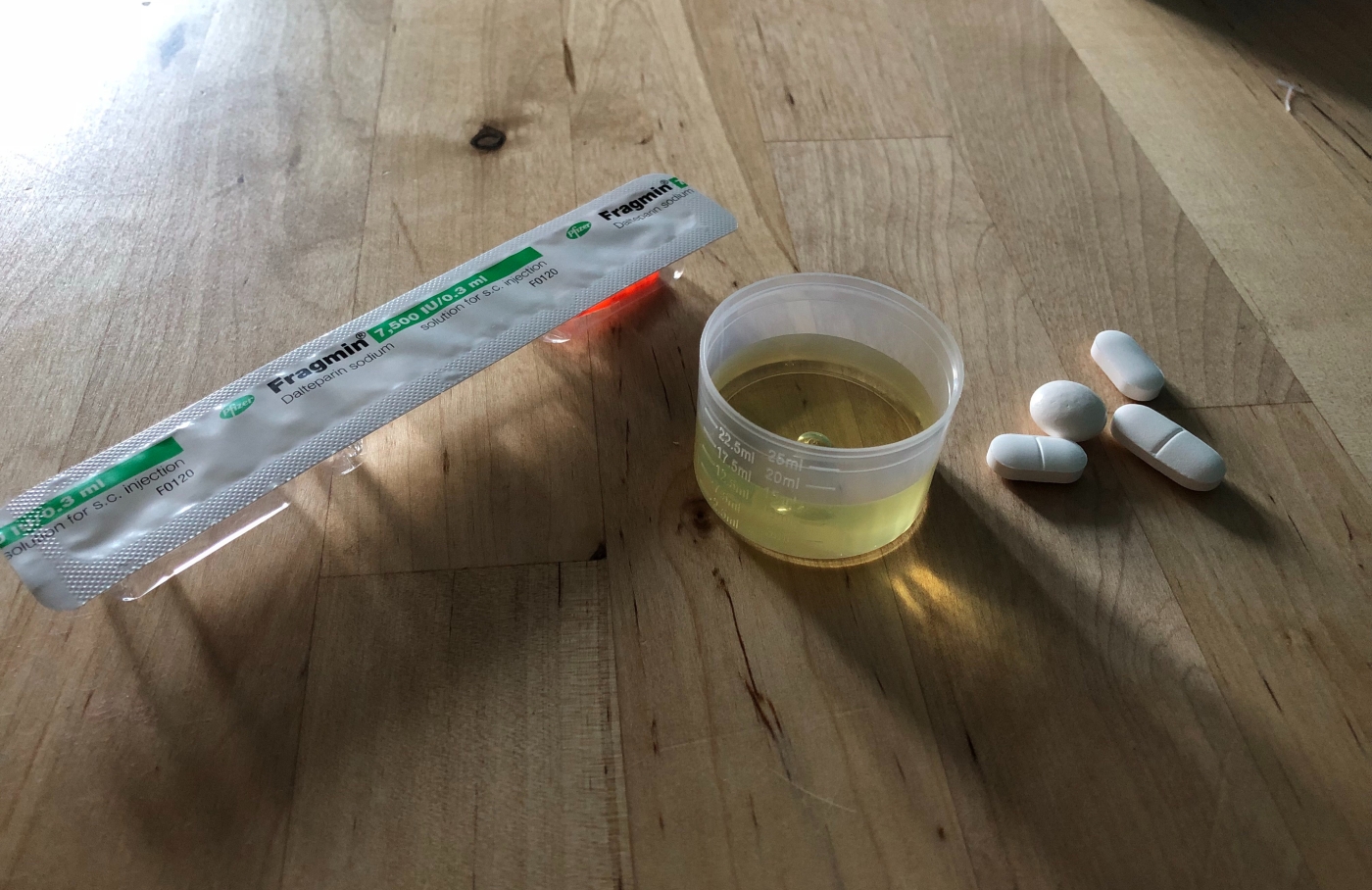 I had a baby the other day.

Actually it was more than a  week ago, but I’ve not really had the space to write about it. I started this post days ago. Turns out being a new parent is quite full on – who knew?! I’ve already forgotten a lot due to sleep deprivation and medical assistance, but would like to record some of it for posterity. I know this probably isn’t why you’re on a blog about reading and writing, but it’s a story so meh. You don’t have to read it if you don’t fancy.

Our son was born at 3.11am after 48 hours of induction and a lot of time with Puzzler® Magazine (the puzzle lover’s favourite for over 40 years).

I was taken into hospital before my due date because I had gestational diabetes whilst pregnant. This is quite common, and is something I will likely write about in future as I have Many Opinions about the way it’s dealt with and communicated. But briefly, what happens is that some of the hormones produced in pregnancy make the body more resistant to Insulin, and essentially as of about April this year I couldn’t process sugar properly.

The hospital was convinced throughout my pregnancy that the child would be an enormous monster with cake for a torso and roulade arms and legs, impossible for me to deliver naturally if we left it growing for a full 40 weeks. Also (and on a less passive aggressive note) there’s a real risk with GD that the placenta can deteriorate quite suddenly if you go full term, which is what swayed it for me far more than the possibility of some kind of GBBO showstopper style delivery.

Induction can work quickly for some, or it can take ages, or it can not work at all.

I was admitted to hospital to try and get things going in the heart of a storm named after me, on International Talk Like A Pirate Day. You might think this would be portent enough for my unborn child to appear in the eye of the storm, some sort of Davey Jones style figure with a beard of tentacles and an outrageous accent, but this was not the case. I was in from lunchtime on Wednesday and had the baby in the wee hours of Saturday morning.

I didn’t write much during this time, but I did finish reading The Left Hand of Darkness by Ursula LeGuin – and I popped a few notes onto my phone here and there. At 2.50am on the 21st of September I noted that:

“I’ve had two of the procedures and my cervix appears to have remained as uncompromising as Belinda Blumenthal’s.

“I’m currently hooked up to a monitor listening to the woman next to me crying softly at the pain of her contractions, whilst in the distance someone in full labour screams. When my midwife has seen to another patient I’ll be treated to a nightly exam of my nethers and likely a third attack of hormones to try and get things going. Magical times.”

At 4.45am that morning they inserted my third pessary, and I wrote that the midwife seemed optimistic it’d thin out my cervix enough for them to break my waters. At that point I thought maybe I’d get to go to the labour ward around 11am. HAHAHAHA.

In the morning I went for a walk up the hill behind the hospital to try and encourage things along. There was a lot of slow-waddling-to-encourage-things-along over that couple of days… Anyway it was one of those lovely crisp autumn mornings with blue sky and sunlight streaming. I met a couple of tiny snails and took a photo of the castle. I felt optimistic.

When I got back they examined me again and said I was 2cm dilated, enough to break my waters as and when the labour ward had space for me. The labour ward did not have space just then. The labour ward was full of folk in labour. September is a bit like that.

The rest of the day was uneventful. I read a bit of Akata Warrior by Nnedi Okorafor. I waited. I updated various people as to the situation using social media. I waited. When my other half appeared we went for another walk up the hill, and took our last selfie as non-parents. We waited.

The labour ward eventually rang to say they had room for me a little bit before 8pm. We were taken along given tea by a nice midwife who was at the end of her shift, and at about half eight Sarah and Jane appeared. They were the ones who got us through.

They asked me how I wanted to labour and I said I’d hoped to use water and to keep upright and active as much as possible. They told me I’d be on an oxytocin drip to get contractions started and they had to hook me up to a monitor to measure the baby’s heartbeat so this would be a bit difficult to manoeuvre. I sort of knew that would be the case though, and had made my peace with not having the birth experience I wanted. Worse things happen at sea.

Probably the next bit doesn’t happen at sea mind you. One of the midwives shoved a crochet hook up to break my waters, which I imagined to be a lot more visceral than it actually was. For some reason my brain imagined a bloody, medieval looking scene even though your waters are literally water and therefore run clear. It was a bit disappointing tbh.

Slightly more gory was the insertion of a canula for my drip, as it spurted blood quite impressively. Then they gave me some attractive disposable fishnet knickers and a maternity pad so I could walk around without dripping on the floor (too much). And so began a further period of moving about to get the party started. They managed to find me some wireless monitors so I wasn’t attached to that machine, so I was more machine age dancing with the drip.

Time is pretty hazy from then on. At some point three consultants came in to say hi. We had to check my blood sugar every hour – it started around 5 and went down. At some point we put on our labour playlist. At some point I was very tired and asked if I could lie on my side just for a little bit, they examined me and found I was 6cm dilated (you need to be 10 to start pushing). At some point they gave me gas and air cause it hurt.

I didn’t like it too much initially as it makes you feel hammered and it doesn’t actually stop the contractions hurting, it kind of gives you relief after them. But at some point I decided to persevere with it, and then I wanted to push but they said it wasn’t quite time, but my body wouldn’t let me not. And then at some point it was ok for me to push and I was still lying on my side but it felt like there was no way I could stand up, so I had to put one leg up and push like that.

And I pushed and sucked down gas and water and around the point I thought I couldn’t physically keep pushing which was rough. But folk kept bellowing that they could see the head, and Andrew was there telling me I could do it, and somehow the head came out and then the wee body was easier and as they laid this tiny thing on my chest Andrew told me it was a boy and we realised our playlist was playing Meet The Foetus by Brody Dalle. I’d listened to Diploid Love quite a bit during pregnancy and assume the wee yin recognised it and wanted to come out to hear it again so Brody, thanks pal.

After that I had to deliver the placenta which seemed to involve them pulling the cord till it came out of me. It was uncomfortable. I did not like it – I felt a bit stroppy at that point. I remember they said the cord was very long, and when it was out Sarah asked if we wanted to see it, and we said OK, and I was peering across this darkened room as she held up this big bloody bag to the light. And they were murmuring about how much blood I’d lost (1 litre by the end of it all) and told us the baby weighed 9lbs then I had to speak to a surgeon and anaesthetist because I had a 3rd degree tear and needed stitches.

I was wheeled to theatre, and the anaesthetist told me I was going to feel like I’d been kicked by a horse but he’d hook me up with some sweet drugs to help out. He duly paralysed me from the waist down whilst a fairly eclectic playlist played in the background – it started with some jazz then went to Freedom by George Michael and at some point Steal My Sunshine by Len and something by James Corden. One of the doctors explained it was from the Peter Rabbit soundtrack and was put on her phone by her six year old.

After I was done they wheeled me to a recovery room and Andrew appeared with the baby. We were allowed to sit/lie in the dark for a while, and then it was back to the ward just in time for breakfast. I woke up with a catheter, unable to feel my legs, and mother to this wee dude. 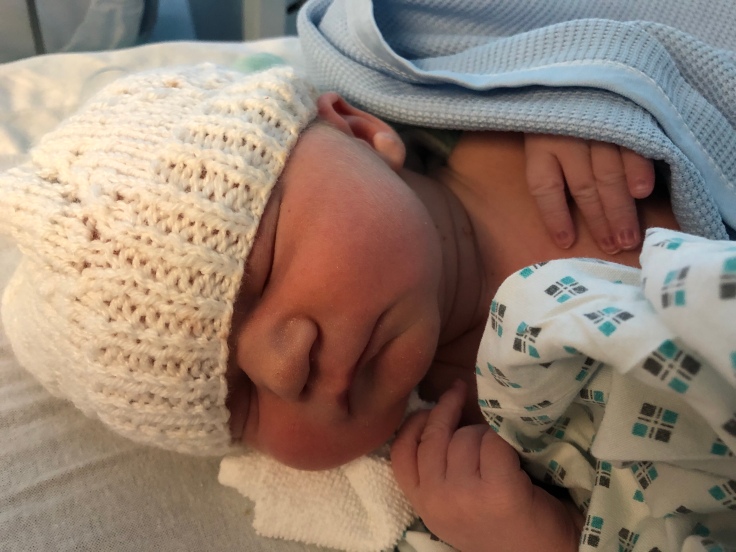 There followed a string of people giving us information we were never going to remember, including instructions on how to administer the drugs pictured in my feature image.

There followed a very tiny amount of sleep and some cold toast.

There followed three more nights in hospital whilst I tried to learn how to breastfeed.

There followed many messages of congratulations, and some visitors, and instructions on feeding and washing and keeping the sprog alive.

A week later we’re still processing it all. Writing about it has helped me do that to an extent. But I think the TL;DR is, things will never be quite the same again…