It’s been a while (last time I entered being March), but this month’s Pictonaut prompt inspired a story.  Why not read it over breakfast, and think about it whilst you enjoy the weekend… 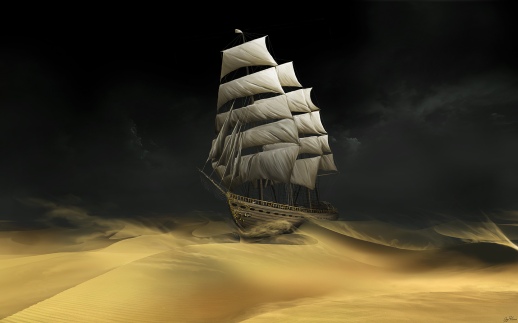 For a long time it didn’t even occur to me that most people dream of different things at night.  I thought everyone saw what I always did: a galleon surging forward across rolling waves of sand.

Of course, I didn’t think everyone instinctively knew my mother was on board and trying to get to me – that would have been insane.  I guess I thought the dream was specific, so that in the subconscious of my neighbour, or my friend Shona, it was their own mothers they saw.

‘She’s not coming back,’ Dad told me flatly when I mentioned the dream to him and asked if he thought mum was on board too.  There was no evidence for this, incidentally – the deck was always empty in the dream.  I never saw her.  But I still knew she was there, in the way you do know things in dreams.

‘Don’t spend your whole life wishing, kid,’ he added.  And he wouldn’t talk about it any more.

I knew he was right, but part of me clung to the hope she’d get bored of her work on the Ship of the Damned and come home.  After all, in the land of the living we have scones.

‘She didn’t like scones,’ Dad said darkly, as if this transgression was somehow the worst of the pain she’d inflicted.  Perhaps all the other stuff would have been forgiveable, if she’d been able to enjoy afternoon tea one last time before abandoning us for a life of tentacles and eternal, echoing screams.

As it happens, I’m fairly confident she did like scones.  I have a distant memory of her cutting one into pieces, doing ‘one for you, one for me.’  I remember getting jam in her hair as my wee hands grasped for the sticky segments and got tangled en route.  I remember her laughing, saying we were meant to eat our food, not wear it.

There’s no point sharing any of this with Dad – he’s annoyed enough as it is – so I keep my memories as quiet as my dreams.

Being sensitive to his feelings doesn’t make me totally silent, though.  I talk to other people, listen to whispers, and I know others see the ship at night, although from the stories I’ve heard they don’t relish these visits as I do.

‘I hate that bloody ship,’ Shona said once, ‘it only turns up when I’ve done something bad.  It’s like a warning that I have to repent, or the crew will come ashore and pull me out of my bed, and then I’ll be just like them.’  She shuddered at the thought, then saw the look on my face.  ‘No offence,’ she added lamely.

There was a time her comment would have bothered me, but that was long past.  Everyone knew where mum had gone – you don’t join that crew and expect to keep it a secret.  As I got bigger I started to realise that Dad and I were the subject of many pitying looks, and endless speculative whispers about why she’d done it.  Mum was described in hushed tones along with the rest of her crew as soulless, skinless, ruthless and evil.  Everyone in the village was terrified by the mere thought of her, and although intellectually they understood Dad and I were victims of circumstance, a lot of them gave us a wide berth just to be safe.  I could hardly get annoyed at Shona for one slip of the tongue – she was one of the only four people in the world still happy to talk to me.

‘I like seeing it,’ I admitted, as if this wasn’t already painfully clear, ‘I think it’s beautiful.  And –’ I paused, not sure whether saying it out loud would act as a jinx – ‘I like to think one day I’ll catch a glimpse of her, and she’ll wave, and we’ll both know the other hasn’t forgotten.’

‘Don’t spend your whole life wishing, Lach,’ Shona told me, voice sharp with concern.  ‘Your mum couldn’t come back now even if she wanted to – you won’t see her again.’

‘You worry too much,’ I said, and Shona seemed content that was an end to it.

When I was thirteen, my dreams became more than just dreams.  I began to wake up with the smell of the night wind in my hair, a thin layer of sand on the pillow.  Every night the ship got closer, and every night I’d peer at the deck through the hot desert air in search of her.  I never saw a soul, of course.  Until the night of my fourteenth birthday.

I went to bed late – I’d been kept in the shop after hours to mop up debris from a broken freezer.  As I lay in the dark, waiting for sleep, I folded my arms behind my head and breathed in the chemically smell of strawberry lollies.

I’m not sure how long it was before I dozed off, but I felt like I was jolted awake almost instantly by a loud knock on the window.  I got out of bed assuming Dad had forgotten his key (wouldn’t be the first time) – but when I looked outside I realised I must still be asleep, because the street was covered in rolling sand and, where the bus stop ought to be, stood the ship.

Since I was dreaming, the natural thing seemed to be to climb out of the window and walk towards it.  As always the night air was hot and dry.  Golden sand whipped across my cheeks like sea spray, and the sky was black and starless above.

‘Don’t spend your life wishing, boy,’ I said out loud, lips cracking in the dry air.

Then something happened that had not occurred before – I realised I was close enough to touch the side of the boat.  Close enough, in fact, to climb the rusty rungs stapled into the hull.  I felt sharp chunks of metal flake away under my bare feet as I ascended, moving closer to the woman standing on deck.

This time I saw her, and she was waving.

‘Where’s the birthday boy?’ Shona asked the grizzled figure on the porch, ‘I’ve got him an amazing present!’

Then she looked properly, and knew exactly where the birthday boy was.

Shona sat down beside the tufts of stubble, the grey eyes shot with crimson and violet, the breath heavy with scotch.  She put an arm around the shoulders of the twice-abandoned man, and they rested silently on a porch step dusted with sand.

‘I told him not to spend his whole life wishing,’ Lach’s father said at last.  ‘I told him so many times.  I told her too, once upon a time.  They never think about the people they leave behind.’

He got to his feet, dusted the sand from his trousers, and went inside without another word.