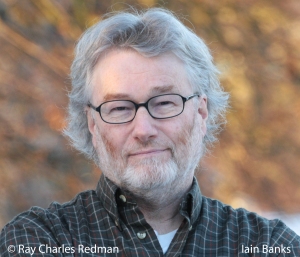 In my line of work, people occasionally send me press releases about interesting booky things that are occurring.  I received such a missive yesterday from the Edinburgh UNESCO City of Literature Trust on the subject of a season of events celebrating Iain Banks.

For those who have not come across him, Iain Banks was a popular Scottish writer who died of cancer in June.  You can read the statement he made following his diagnosis here, and the last interview he gave to the grauniad here – these give some insight into him and his work, and will hopefully encourage you to pick up one of his novels to get to know him a little better.  NB – he wrote Literary Fiction (The Wasp Factory, The Bridge, The Crow Road) as Iain Banks and Science Fiction (Consider Phlebas through to Hydrogen Sonata),  as Iain M. Banks.

I think this was the first time the death of a writer has been a major talking point across all my social spheres – people I know from work, home and online were all deeply saddened.  In ‘real life’ people shared stories of their first brush with his work or grumbled about that copy of The Bridge they lent to someone at uni and never saw again, whilst on Twitter fans posted pictures of his books with glasses of whisky on top in tribute.  It’s very fitting that there would be a range of different events to pay tribute to him – and kudos to the City of Literature Trust for coordinating them all.

Imminent events include an exhibition of science-fiction poetry at the Scottish Poetry Library (from Thursday 4 July until the end of August), and an evening of utopian spoken word called This Side of Paradise on Sunday 7 July which has been put together by Illicit Ink and will be held at The Bongo Club.  Proceeds raised (from the suggested donation of £4 as an entry fee) will go to Cancer Research.

Other events include a book quiz at Central Library on July 25, a screening of The Crow Road at the Filmhouse on August 18, and a tribute night organised by the Society of Young Publishers at Looking Glass Books on July 31.  That will be called Iain Banks-ism, and submissions are open now!  They’re looking for written submissions, approx. 1500-2000 words, featuring an opening line from any of his books.  Successful entries will be adapted into dramatic readings by and prizes will be awarded for best reading and best story. Send your entries to edward [at] birlinn.co.uk by midnight Sunday 14th July.

There is also a book festival event, A Celebration of Iain Banks, at which Ken MacLeod, Val McDermid and Ian Rankin discuss his work – but tickets have already sold out.  Told you he was popular…

For latest news and events happening across the country in memory of Iain Banks and for more information on the author and his work, see www.iain-banks.net.

3 thoughts on “Celebration of Iain Banks”