A Place In The Country (Pictonaut Challenge) 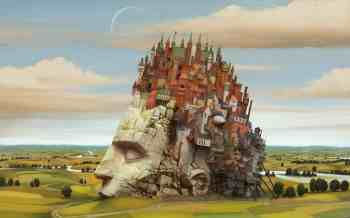 As you can from the accompanying illustration, the town of Bishop’s Wallop was a little bit unusual.

This was not because the roofs were green, for they were mostly made from copper and emeralds so that was exactly the colour they should have been.

Neither was it because the town was constructed around the walls of a spindly castle, for in the olden days it was common to build houses around the castle or manor of a Lord or King, who would then protect you if invading armies came to pillage your house and wee on the bedclothes.

No, the unusual thing about Bishop’s Wallop was that it had been built on top of a big stone head.  If you’ve studied geography, you may be aware that towns are more traditionally built beside a river or other water source – of which Bishop’s Wallop had none.  The inhabitants had to get bottled water bussed in from a factory in the Highlands of Scotland.

Having said that, if you lived in the town of Bishop’s Wallop yourself – if you had grown up there and never really known that towns could be any different than that one – you would not think it unusual.  People often don’t think that their own town is weird until someone else from somewhere else points it out to them with a barely concealed giggle behind their oily cravat.

Still, it was a bit weird.  There’s no denying it, even if you’re an especially gifted denyer of stuff like an actor or a little sister or a Prime Minister.  And you have to wonder how on earth it got built there in the first place – surely no sensible builder would listen to someone that wanted to build her house on a big stone head, would they?

If you went to a sensible builder and said “oi, Jimmy Builder, build me a house on that there stone head,” they’d scratch their bum and have another cup of tea and say something patronising like, “wouldn’t you rather we built it on flat solid ground, Mrs Jessop? I mean, what if the big giant head comes back to life like all the old stories say it’s going to do any day now?  He won’t take very kindly to having your house all stuck on the top of his cranium now will he?”

From this we can extrapolate that the location of Bishop’s Wallop was partly down to some pretty un-sensible builders, who probably ought to have had their building licenses suspended whilst they took a long hard look at themselves.  But that is not what happened to them, and if you read on a little further I will tell you for why.

However, before I get to that, I should tell you another unusual thing about Bishop’s Wallop, namely the fact that everyone living there was a magpie.

Yes ladies and gents, a magpie.  There wasn’t a single human being in the whole place, and really that is much odder than the location if you consider the fact that magpies don’t even live in houses.

Of course, Bishop’s Wallop wasn’t always lived in by birds.  It was originally built and lived in by men, and several women, and one small elephant.

Those men (who were just blokes with some raw materials and a dream, not qualified builders like you or I) were mostly called Steve, and they took the decision to build the new township of Bishop’s Wallop on top of a stone head because they thought it would look cool.  You may think that sounds silly, but almost all the important decisions that have been taken throughout history were a result of someone thinking ‘that’ll look well cool.’

Their wives shook their heads and said “oh Steve, it might look cool, but is it safe?  What if the head comes back to life and eats the children?  What if it eats your poor old mum, Steve, did you ever think of that?”

And all the men called Steve scratched their heads and pick their noses and say, “I dunno, I hadn’t really thought about it too much to be honest… What do you think, Mum?”

And all the mothers in law called back through a haze of knitting and cough syrup and lavender drops, “oh son, I’ve had my time on the earth! If the gods say I should shuffle off this mortal coil through a stone giant’s digestive tract, then so be it.”

Those mums were very philosophical really, in the face of being eaten – I expect we can chalk it up to the extra life experience.

Anyway the village got built in spite of all those reservations, and then one day the giant head came back to life and ate all the people that lived there.  All the wives would probably have said “Gods sake Steve, I told you so!” only they couldn’t, because they were eaten, which makes it hard to get words out.

So the town of Bishop’s Wallop was empty for a time.  About a week, if you want me to be more specific.

Then, a week after eating all those people and that one small elephant (yes, even the elephant, it was very sad) the giant went back to sleep again because he had nobody left to talk to.  This is an occupational hazard of gobbling everyone in sight, so just remember that for next time you’re feeling peckish.

Yes, the giant went back to sleep, and a few hours after that the magpies moved in.

At first it was only a few of them.  Barry Ronson and his wife Meryl and their three chicks, Annabel, Ruthie and McLovin, were on holiday in a tree nearby when they spied the empty castle and thought it might be fun to visit.  As soon as the youngest started a-splashin’ in an old brass kettle in the castle kitchen, their parents knew they wanted to stay forever.  The smile on his little beak was perfectly adorable, and the castle was full of nooks and crannies for hoarding shiny things.

As time went on, word spread amongst the bird population of an empty village with lots of bird baths and dust baths and seed baths and mead baths.  It was like paradise, the stories went, so of course more and more magpies moved in.  There they were safe there from angry pensioners and polar bears and other wild beasts that hated their kind (for it is true to say that a lot of people hate magpies, because people hate what they do not understand).

It was all very jolly, and remains so to this day.

But you may remember a story that the big stone giant will wake up any day now, and when he does he will be hungry for builders and mothers and one small elephant.  When he does, I fear the magpies of Bishop’s Wallop might get a nasty surprise…

One thought on “A Place In The Country (Pictonaut Challenge)”