End of Year Review: The Plots

My festive stay in Perthshire sans graphics tablet has been prolonged, so the comic isn’t finished.  However, it’s a year to the day since I registered the 12 books in 12 months domain name, so it seems like a good time to reflect on how it’s gone.

With that in mind, American novelist Alison Walkley came across 12 books in November, and asked if there was a post explaining the plots of each book.

I said on the Get Involved page, slightly cryptically perhaps, that ‘planning is underway’.  I wrote: 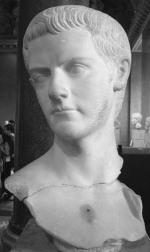 The day to day thoughts of an Ancient Roman Emperor as he descends into madness – or does he?

I found out as much as I could about Caligula in that space of time from sources including the BBC adaptation of I Claudius, the lives of the Caesars by Suetonius, and a load of books from Central Library in Edinburgh.

I spoke to some of the staff at the theatre in St Andrews for anecdotal evidence and wrote:

Murder in the Theatre (Murder Mystery)

The Chief Exec of a theatre is mysteriously murdered. Everyone has a motive and nobody has an alibi… so whodunnit?

I started with the very vague premise “Would like the hero to be an older gent.  Beyond that, I am open to suggestions.”  I was given a name for this gent by a lady on Twitter, and drafted:

The Trial of Victor McGlynn (Western)

OAP Victor McGlynn sees his life on the estate through a prism of old Westerns, so when bandits start terrorising decent local folks he decides to take a stand.

Having spent many happy hours slagging off paranormal romance, it was time to put my money where my mouth is and have a try.  It was really hard.  The detritus I ended up with was tentatively called:

Jennifer has serious angst. Unwittingly involved in a love triangle, stalked by a troll with father issues, and to cap it all she’s a vampire – so her hormones will be in flux for the rest of eternity.

I started out with no ideas for this other than a dragon should be involved.  I ended up with:

Archie and the Dragon (Fantasy)

Can sheep do magic? Can dragons control their appetite? Can horrible ballet dancing cousins ever change their ways? You’ll find the answers to all these questions and more in this story.

I decided to take the experience and contacts gained from two years of attempting to break into freelance journalism and incorporate them into a humorous and topical book about the changing state of the industry.  It is provisionally called:

When the Newdruim Chronicle goes under, the editorial team decide to set up a dynamic new gossip website. Trouble is, none of them know any gossip. Or how to use the internet. But that isn’t going to stop them…

I’ve wanted to write for children almost since I was one, and the idea for these characters had been floating around in the back of my head since at least 2006.  But when it came to doing it I was burnt out, and I’m really unhappy with the current version of:

Chris never paid much attention to his next door neighbour, but when he returns a lost cat he is plunged into an adventure involving a moving house, talking animals, and a tiny, angry wizard.

I tend towards the future dystopia in my sci fi reading (that and Douglas Adams, but I wanted to try something a bit more serious).  Unfortunately I kept changing my mind about this future, which needs a lot more thought than I had time to give it in a month at all, never mind book festival month in Edinburgh.  It was the first manuscript of the year that became a series of ideas and planning with less pretense of narrative the further I got.  So, that is the current state of:

I decided to write some realistic, sarcastic, UK chick lit.  It lacks coherent plot too.  But I’m optimistic there is a kernel of good in:

Just like Carrie, Samantha, Charlotte, and the other one; Annie, Beth, Lauren and me are living the high life as glamorous young professionals without a care. Or not. This is what Sex and the City could have been like if it was set in Scotland and starred human women.

So much writing advice I’ve read this year said to perfect the short story before bashing on with a novel or nine.  This seemed the perfect genre to work on a short story collection.

The Nephrop and Other Stories (Horror)

A fisherman searches for his one true love, a shop assistant faints at the sight of wrists, and a spider remembers his long lost brother. These are just some of the weird and wonderful stories in this horror collection for Hallowe’en.

National Novel Writing Month, the event that sparked the 12 books idea, came upon us once again.  I began work on a literary opus:

Balding, recently divorced Middle Manager by day; dynamic performance poet by night – that’s how Ronnie describes himself in his lonely-hearts ad. Through the power of language (and open mic events) he is putting his life back together.

I’ve been drawing and writing comics for about ten years so decided to finish the year doing just that.  I am currently working on a noir comic that will hopefully be available to download at the weekend – Christmas has got in the way of my drawing time a bit.

The King is dead… long live the king.

2 thoughts on “End of Year Review: The Plots”