A Call To Arms

Family was very important to Caligula, to the extent that he had most of them deified (ie worshipped as gods), he put them on coins, and he had the senate swear allegiance to his sisters as well as to him.

His favourite was meant to have been Julia Drusilla – the only one who probably wasn’t involved in a plot to kill him, to give her her due – to the extent that the gossipy so and so’s who wrote the historical sources closest to the period accused him of having an incestuous relationship with her.  Certainly he was very cut up when she died, but although he made a massive fuss and ordered the entire empire into mourning, that wasn’t without precedent. 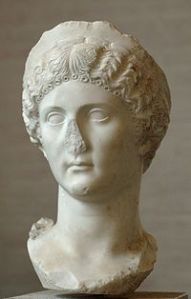 Anyway, whether he loved her in a wrong way or not, it seems they were close.   So in the blog I’ve decided to have him composing some epic emo poetry to her memory.  The quality should be no higher than William McGonagall, and no lower than that of a fifteen year old blogging in the darkness about how unfair everything is.  With that in mind, can anyone point me in the direction of some terrible, self indulgent poetry for inspiration?

One thought on “A Call To Arms”