Too Many (Note) Books

Behold, the tower of my ideas!

It could be said that I have a bit of a notebook problem.  There are 25 here, and that’s not the full set.  Contents range from nothing to full and everything in between, including random scribbles on random pages (seriously, what possessed me to start writing six pages in?).

Some of these contain half written stories, some have quotes I collected to keep me inspired, and one begins as a kind of scrapbook and then goes into a mish mash of diary entries and hilarious (by which I mean unkind) cartoons drawn on holiday when I was a teenager.

I love buying (or being gifted, if you’re offering!) notebooks.  In spite of the fact I work so much with my computer and phone, I don’t like to be without some bound papery goodness as backup.  On the rare occasions when I find myself caught short, I’ll buy a new one without a second thought.  The last time this happened (the end of June) I was on my way to St Andrews by train, and a certain stationers at Waverley who shall remain nameless had apparently neglected to do a stock take, because I wound up spending £10 on a packet of biros and an a5 notebook from their almost non-existent pen and paper collection.  Daylight robbery, but there again that particular notebook is nearly full already and the pens will last ages.  And who knows, perhaps one day the contents of said notebook might help me make the cash back…

The empty notebooks that exist in my collection are empty because I felt it necessary to have a proper good idea before sullying their pages with my nonsense.  They are different sizes and shapes so I can carry them in pockets and bags and papooses, and once I’ve got them I’ll write in them, doodle in them, and gaze lovingly at them whilst I try to think of a story good enough.

Here’s an example of an unsullied one that my sister made for me in case of writer’s block.  She got a blank notebook and jazzed it up with quotes, colours and things to make me laugh so I would never be without inspiration.  My sister, it must be said, is a bit of a legend at coming up with gift ideas. 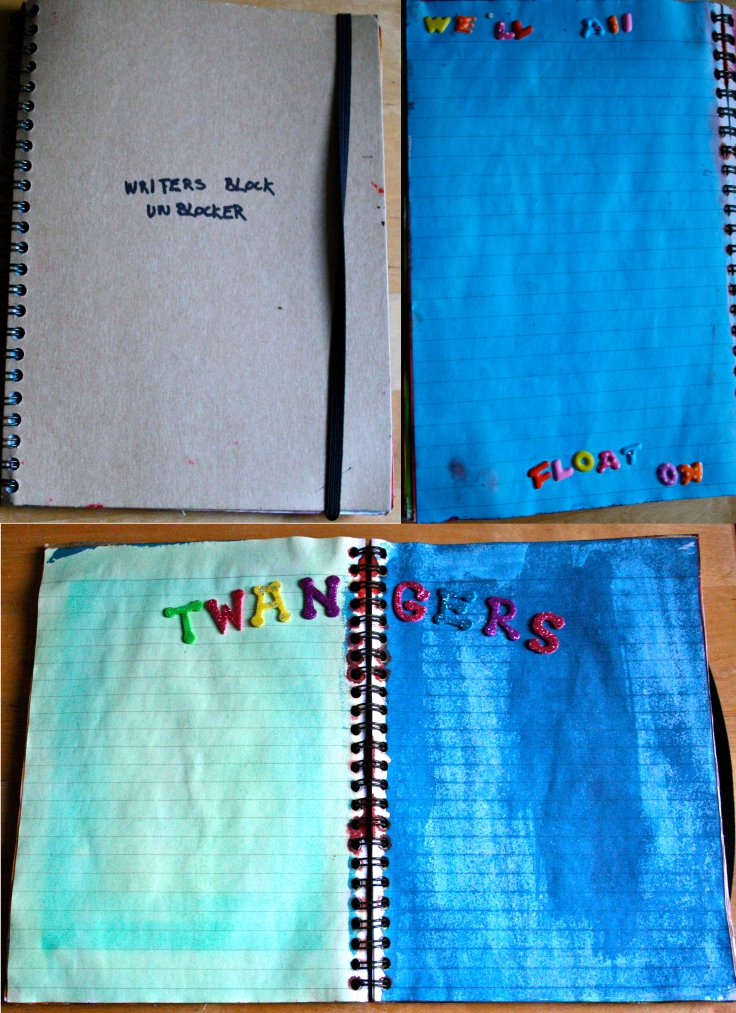 I also like reading back over full notebooks, trying to decipher what I was talking about.  Here are a few snippets from some of the ones pictured.

The opening of a story I started writing on the bus to work in 2009:

Everything stopped.
‘You do realise,’ Time said slowly, ‘that I could very easily have you killed?’
The skinny boy shrugged his skinny shoulders, non committal.
‘Doesn’t that bother you?’
The boy appeared to think about it for a while.  He shook his head.
‘No,’ he said.

Another enigmatic beginning in 2007, which sadly peters out:

‘Today I was colonised by spiders – which seemed strange, as I am not the owner of a tuffet.’

‘You need to decide what you want to do – you need to be quite ruthless with yourself – and just do it.’

I’d forgotten that conversation completely, but I’m glad I wrote it down.  My parents have always been unconditionally supportive of my writing ambitions, but it was quite nice to come across a ten year old reminder!

So, am I alone in this obsession?  How do you feel about notebooks, The Internet?  Answers in a notebook – or rather, in the comments section at the bottom of the page – and I’ll leave you with this from 2004, a joke my brother told me.

Him: Why should you never put a pie in a windmill?
Me: I don’t know.
Him: Because it’s a waste of a pie.

3 thoughts on “Too Many (Note) Books”