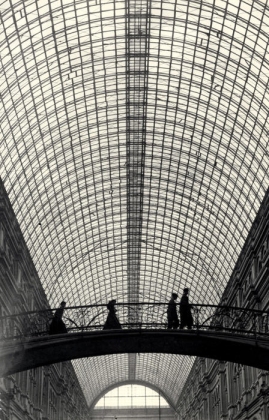 This month, The Rogue Verbumancer (or Glempy, if you prefer) challenges the internet to write a thousand words on the topic of going for a walk over a bridge.  Or y’know, anything else that springs to mind on seeing this picture…  But as you will discover, my brain opted for a fairly literal interpretation.

‘Yessir,’ she replied without looking at him.  ‘I’m ready, sir.’

‘I doubt that,’ he snorted.  ‘But you are thirteen today, and that’s good enough.’

Roisin had looked forward to this for a whole year, marking the days on the skirting under the bed with charcoal rescued from Nan’s fireplace.  (She’d started putting her countdown there so nobody would see it and yell at her – but the secrecy had got less important lately.  Nobody much really bothered to yell at her anymore. It would be different now that Monday had come.)

She’d awoken at 5am, and it took all her willpower not to leap out of bed straight away.  If she got up now Not Nan wouldn’t let her go to the bridge, Monday or not.  Instead of getting up she had concentrated on breathing deeply, pushing her shoulders back into the ancient mattress and screwing her eyes tight shut.  The broken springs stung her back, but she didn’t mind them for once.  Monday was really, finally here.

At 6.28am she pulled on her clothes so that when Not Nan’s footsteps creaked outside she was ready, standing to attention at the bottom of the bed.

He opened the door and stood silhouetted for a moment, broad and imposing.  He had always had this penchant for the dramatic. Roisin kept her spine stiff and tried not to breathe.  Any sudden movement might incur his displeasure.

Not Nan advanced and looked her silently up and down, white hair suddenly silver in the dawn light streaming through a crack in the window boards.   Roisin looked away, staring never ended well – but she felt something different about him.  It reminded her of Nan, somehow.

‘Come on then,’ he said, already half way down the stairs.

They walked to the arcade of course, Roisin scampering behind in a half jog to keep up with him.  Their journey was mainly conducted in silence, except for the rhythmic crunch of boots in the snow.  Roisin snuck furtive glances at the empty streets, her mind full of Nan’s stories of the time before.  Back then, Nan said, the city was so full of people you could hardly move – and there wasn’t snow all the time but changing seasons, of sunshine and wind and rain.  Mostly Roisin put the stories down to the ramblings of Nan’s illness – she wasn’t old enough to remember that far back.  But they were nice memories, even if they weren’t really hers.

When they reached the arcade, Not Nan stopped short and did something he had never done before.  He stooped so that he was at eye level with Roisin, and looked directly into her face.  There was no way she could avoid his gaze at such close quarters, so reluctantly she looked back.  His eyes, which she’d never really seen close-to, turned out to be startlingly green.

‘If I’ve been hard on you,’ Not Nan said, putting his hands on her shoulders, ‘you shouldn’t hold it against me.  You’ll soon find out that I had to be, after you’ve crossed over.  Things are tough here, but over there…’

Roisin stared at him in surprise.

‘You probably thought I hated you,’ he said, ‘and that’s good.  You shouldn’t form deep attachments over here when you’re destined for over there, it’ll only hold you back.  But I do want you to know, Roisin, that I’m proud of you – just like Nan was.  You’re a bright girl, and you’re going to do fine.’

He straightened up, and surprised her further by enveloping her in an enormous hug.  His coat smelled of outside and age and hard work.

‘I can’t come in with you,’ he said as he released her.  ‘Because we aren’t the same blood.  Just follow those three, they’re crossing over too.’

She followed his gaze and found a couple, pinch faced, arriving with their daughter.  They were walking briskly – she’d have to trot to keep up.

‘Goodbye,’ she offered, turning awkwardly to him.  ‘I… hope you’ll be alright.’

She whirled around and saw the family of three were already on the clockwork escalator.  She broke into a run, cursing the heaviness of her skirts as the weighted hem slapped against her ankles.

When she caught up with them she slowed her pace, suddenly embarrassed.  The parents didn’t seem to have noticed she was there, they were conferring in hushed tones and kept stealing furtive glances at their daughter.

‘Are you a Monday too?’ the daughter asked, and Roisin jumped.

‘Doesn’t look like there are many of us, does it?’  The other girl pointed ahead where the bridge stretched out under a ceiling of crystal.  It went on so long they couldn’t see the other side.

There was nobody else, either on it or waiting to cross.

‘Maybe they got slowed by the snow?’ Roisin suggested.  Above them the ceiling was blanketed in white, they could see the blue hands of an unfortunate cleaner working to clear it.

They were nearly at the bridge now, and Roisin’s heart was in her mouth.  In her mind’s eye it had always been a little thing, made out of wood and taking her to a better life.  In reality it was long and imposing, wrought of iron carved into intricate patterns and arching over a thousand foot drop.  The end of it was shrouded in darkness.

Roisin stole a sideways glance at the other Monday, whose face betrayed reservations to her own.  She wondered out loud whether it was safe to walk on, and Roisin had to agree that the structure looked distinctly wobbly.

‘Of course it’s safe,’ the girl’s mother said, but she didn’t look wholly convinced.  ‘Let’s get on with it.’

The parents went first.  The bridge swayed a little, but remained intact.

And together they stepped onto the bridge between worlds.  The last of Monday’s children.

5 thoughts on “Going For A Walk (March Pictonaut Challenge)”