Getting to Grips With Graphic Novels 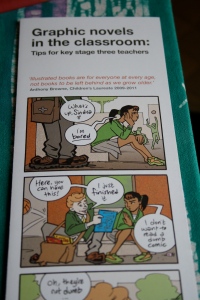 This is my last post about the book festival, which finished yesterday with what I can only assume was a life-changing production of Alasdair Gray’s Fleck (I don’t know for sure as I didn’t manage to get a ticket.  Instead I went to see The Guard, a black comedy with Brendan Gleeson and Don Cheadle which was very funny – highly recommended).

“I had a crush on Asterix,” offers Emma early on in the discussion.

“Fair enough,” Dr Mel lies effortlessly (or maybe she really does think it’s fair enough.  Who am I to judge.)  “We had Asterix in the school library in every single European language other than English.  English was cheating.”

This proclamation was designed to ease us into the idea that actually comics are all around us, and are not the alien destroyer of literacy that you might think.  Unfortunately I don’t think it provided the revelatory experience that it might have done a decade ago – without wishing to sound patronising (she said in a patronising sort of way), I think the comic debate has moved on a little.  I hope it has, anyway.  Most libraries have a fairly decent range, in Edinburgh at least, and comics are quite widely recognized as being good for getting reluctant readers to pick up a book.

The talk wasn’t entirely what I had envisioned, although with hindsight I should probably have attached more importance to the fact the event was called Getting To Grips With Graphic Novels.  Instead, the thing that caught my eye was the first line of the blurb, a crass assumption that was apparently going to be challenged, “girls don’t read graphic novels.”

Of course as a girl who reads and occasionally even draws comics (November is graphic novel month, after all) I have a vested interested in that debate.  But I was also curious on the grounds that – based on my time working in the library and my other half’s experience working in book shops – it actually seems to be true that more men read comics than women.

I think that’s beginning to change, and I was hoping for some discussion on the changing role of women in comics, both in terms of creating comics and in their portrayal by the medium.  Maybe I thought there would be a mention of Marjane Sartrapi, or Posy Simmonds, or maybe the increasingly popular internet comics of Kate Beaton and Allie Brosh.

However, Dr Mel’s argument got as far as she didn’t think it was true girls don’t read comics, on the grounds that girls used to love the strips in Bunty and Jackie.

Now, I used to get the Bunty and I did indeed like the comic strips (The Four Marys, anyone?), but the argument still doesn’t hold much water for me.  That’s mainly because I am probably one of the last people to have had a subscription to Bunty – D.C.Thomson stopped making it a decade ago in 2001, while Jackie went under in 1993. I just don’t feel they’re the most contemporary argument in favour of women liking comics.

Still, it’s my own fault for thinking the talk was going to be about something different – the main focus, as the blurb also mentioned, was on convincing people that the comic is a valuable literary source in its own right.

“I went into school at the age of 5 or 6 and was told to bring in a favourite book from home,” recounts Dr Mel, “so I took in Batman and the Black Panthers.  The teacher looked at it and then told me to go home and get a proper book.  I went home, but didn’t bother going back in.”

Obviously this was a teacher sadly lacking in vision – Batman and the Black Panthers?!  How cool is Dr Mel, when I was 5 I was still into Thomas the Tank Engine – but I’m not convinced it would happen today.  There were at least three teachers in the crowd who came along to get guidance on the best way to teach a graphic novel in class, so the whole talk was a bit of a case of preaching to the converted.

Having said that, there were some interesting points made.  Vieceli, for example, showed some slides for a book she did for the Manga Shakespeare series and talked about the fact that because she comes from a theatrical background, she came at it from the point of view of how she would direct the play.  “Shakespeare should be seen,” she says, “and with a graphic novel you can use abstract shots or images to pull out the subtext of the play.”

Vieceli also explained that when manga first came over to the UK, publishers used to flip the pictures over so you could read the story front to back.  This essentially meant all the art was in a mirror image, which detracts a great deal from the reading experience.

“The great thing about comics is that they’re led by you as the reader,” she said.  “You get to decide the subtext, and when to move on to the next panel.”

“There is a skill to reading comics,” Dr Mel pointed out, “it demands multiple literacies.  You have to know which panel to go to, and it doesn’t come naturally, it needs to be learned.”

This reminded me of the fact that I have read several times graphic novels are great for kids with dyslexia, on the grounds they are short and fun to read – but my dyslexic sister says actually there’s too much going on and they are really difficult for her to follow.  Unfortunately there wasn’t time to ask whether Emma or Mel had come across that, because they’re so enthusiastic and chatty time ran out before I got a turn.

Still, I hope they made a few more converts to the graphic novel cause, and my questions will keep for another year.  Although maybe next time I’ll pay a little more attention to what I’m signing up for.