All Made Up – Janice Galloway 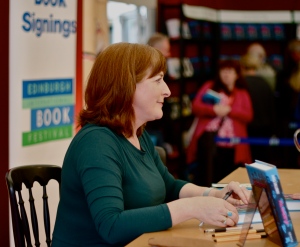 This morning I trumped along to Charlotte Square once more to see Janice Galloway talk about her new book.  Following on from her anti-memoir about her childhood, This Is Not About Me, volume 2 is about her teenage years in Ayrshire and is called All Made Up.  I sense a theme.

The event was held in the RBS Main Theatre, and it was rammed.  The girl sitting next to me, who was writing about it for Three Weeks, had seen Galloway before and didn’t find this remotely surprising.  I sense I have been missing out – I came because the programme blurb looked interesting.

As the lights go down and everyone settles in, event chair Ruth Wishart introduces All Made Up as a book “where sex and music jostle for priority status.”

“And Latin,” Galloway chimes in.

This sets the tone, and leads the author into an explanation as to why she doesn’t see the book as a straight memoir.

“Maybe it’s because in Scotland talking about yourself is seen as the eighth deadly sin,” she speculates, “the word memoir is ‘me’ followed by ‘moi’ after all – isn’t that awful?  The book is written in a novelistic way, and I don’t think the fact that there are details in it that really happened doesn’t mean the narrative is not constructed.”

The first reading is about the role of television in Galloway’s house – she describes it as a family friend, making them laugh and educating them and keeping the peace between her and her sister.  The second was going to be about education, but instead she opts for boyfriends.

“The nice thing about having a boyfriend,” she says afterwards, “is the fact that someone else is prepared to let you in on how they live.”

The Q&A session throws up questions that have been asked in reviews of the book, mainly about how made up it all is.  One audience member wants to know whether she changes the names of her characters to protect the innocent.

“When you go to a publisher with something like this, one of the first things they will ask you – with great hope in their eyes – is “is that person dead?”  This is because you can’t slander the dead, apparently, which seems unfair.”

She does change the names, she says, partly because of the discomfit of the publisher but more because she needs to in order to gain some distance from the characters.  The whole book is written around a fictional structure, because “life doesn’t happen in paragraphs.”

Galloway writes this way because she thinks it’s more interesting to create a story that people can relate to than it is to make things up entirely.

“And reading a biography of a famous person can be strongly isolating and boring, because you can’t relate to them,” she points out.  “Whereas if you read something where you recognize the surroundings or you can say of a character, ‘I know someone like that,’ it’s more engaging.  The little details can be very powerful.  The extraordinariness of the every day never fails to take my breath away.”

She doesn’t just repeat the every day verbatim, of course.

“Experimentation is part of the fun of writing,” she says.  “If you can’t play you’re not long for this world – you might as well be eaten by a bear.”

She goes on to argue that the distinction between reality and fiction is somewhat unhelpful, or even untrue.

“I shouldn’t admit this with someone from my publisher here, but I’m starting to get confused by what fiction thinks it’s doing,” she admits.  “Nothing is ever completely made up, characters are all autobiographical to an extent because you’ll put yourself into them.  And the plot of someone’s life isn’t the interesting part, it’s the psychology of them – what they do with themselves.  As a writer it’s my job to piece psychologies together into a narrative.”

When you are doing this, she argues, it’s impossible not to put a little of yourself in there.  You might think you’ve made up a character completely and then realize you’ve given them a job you once had or something like that.  As for her characters, she says it doesn’t really matter how much of them is true and how much is made up.

“I used to say of my family, ‘you couldnae make that up.’  But that’s the mistake I was making – I didn’t need to.”

All Made Up, Ayrshire, boyfriends, characterisation, Edinburgh, Edinburgh Book Festival 2011, education, experimenting with form, Janice Galloway, music, narrative, psychology, Ruth Wishart, Saltcoats, Scotland, teenage memoir, This Is Not About Me

One thought on “All Made Up – Janice Galloway”