The Politics of Book Purchasing

You may remember Lyndsay Wheble from her website, Tolstoy is my Cat – or perhaps even from the interview I did with her last week as part of my book blogger series.  Today she has written a guest post on a subject close to my heart, and possibly yours too – an addiction to books.

Today, I bought four books when I meant to buy one.

This is not an unusual occurrence.

END_OF_DOCUMENT_TOKEN_TO_BE_REPLACED

The internet is full of book bloggers, passionate readers who dedicate vast swathes of time to promoting books to the general public purely because they can.  I thought it was time to meet some of them.  This week, I chat to Lyndsay Wheble, who writes about all things bookish (including her own fiction) on Tolstoy is my Cat.

END_OF_DOCUMENT_TOKEN_TO_BE_REPLACED

Like a trainee social worker or a graduate of philosophy, it is important for the NaNoWriMo participant to reflect on their experiences and achievements in order to get the full benefit from the experiment.  So, what have I learned from churning out 50,310 of literary fiction over the past 29 days?  (For the slower amongst you yes, this means I have now ‘finished’ the challenge for a second year). 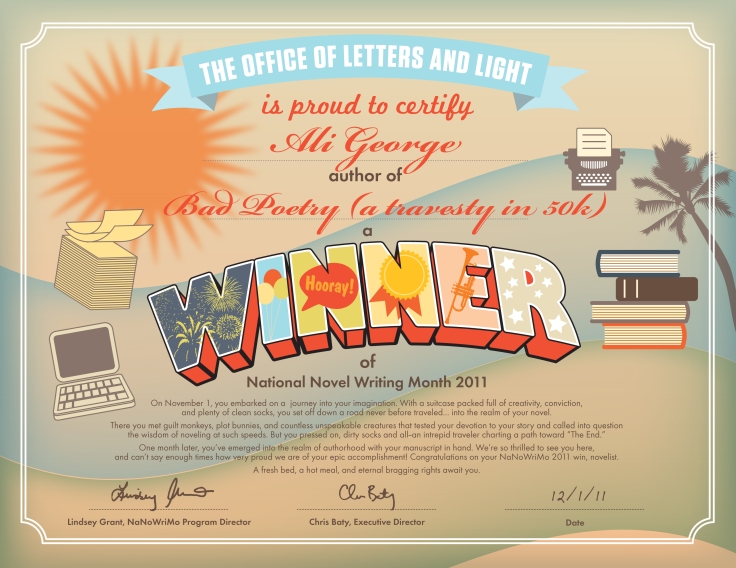 Now to get ready for book 12 (which at this point in time is likely to be a series of one off webcomics, although we’ll see how I feel come Thursday…)

What Is Literary Fiction, Anyway?

As you may already know, for this November’s National Novel Writing Month I will mostly be writing a work of literary fiction.

I was originally going to do a graphic novel, but if I stick with that there’s no point signing up because I won’t reach NaNoWriMo’s 50,000 word target even if I take the whole month off work and do nothing but write and draw.  And given that NaNo is one of the main reasons 12 books in 12 months happened, it seems churlish to ignore it this time round.

So I’ve switched, and now the graphic novel is going to happen in December and will probably be a three panel strip about Santa or something.  Well, actually it’s more likely to involve a series of cartoons about me trying to write 12 books in 12 months… But I digress.

A couple of folk have asked me, “hey Ali, what do you mean by literary fiction?  Surely the word ‘literary’ derives from the Latin ‘litterārius’ simply meaning ‘of or used in writing’?  Are not all your books then literary fiction, as they are written down?”

END_OF_DOCUMENT_TOKEN_TO_BE_REPLACED

Where Would You Want To Be Shelved?

My conversation with Edinburgh-based writer and tweeter Andrew Blair continues apace today, after a wee little break yesterday.  You may remember that in the last post I asked him what his view was of the BBC’s emphasis on Literary Fiction over all else for their World Book Day coverage, my own view being that it’s a little bit silly because it ignores a vast section of the reading population.

The documentary with Sue Perkins was a bit patronising.  It only really dealt with popular fiction aimed at women and even then managed to assume that this meant nothing more than Chick Lit.

It started with the assumption that Literary Fiction is objectively better, which is flawed. People do not read books based on objective critical analysis. Then an unsympathetic presenter tried not to ask people ‘But gosh, don’t you realise it makes you look thick?’

The next show featured a group of first-time authors of literary fiction and a brief history of the genre. It was amazingly dull, and represented a tiny fraction of the books that we sell. Ignoring genre-fiction for a second, I don’t think Non-Fiction even got a look in.

What’s more, quite a few of the new authors were writing books that were clearly science-fiction, fantasy or crime novels but had apparently managed to find publishers who would market them as literary fiction.

A general rule of thumb I’ve learned from working in a bookshop: if a new book is clearly genre fiction but is going to sell well, it will be moved as quickly as possible to the Fiction section so that everyone who has heard about it won’t have to mingle with the Martina Cole and Joe Abercrombie fans.

OK, so what’s in your Fiction section, if not genre fiction?  How does a major book retailer approach genres, and does this affect what publishers do?
And as an author of genre fiction, would you expect me and my readers to be looked down on by your litfic clientele?
Andrew:
Fiction is divided along the following lines in my store:

Everything else is under ‘Fiction’. This includes Historical Fiction (which includes Historical Romance if the author is popular enough to make it out from the Romance section), Literary Fiction, Chick-Lit, Modern Classics, Westerns, Popular Fiction, Thrillers and Comedies as well as stories that would happily fall under the smaller genre fiction banners.

So when I say ‘Genre Fiction’ I mean something that would fall outside of a Fiction section in most bookshops (other chains and indies usually shelve things along similar if not identical lines). In ‘Fiction’ you might find The Passage by Justin Cronin, or I am Number Four by James Frey (and some poor bastard he screwed over), and Ishiguro, Niffenegger or Atwood… People who have written Genre Fiction but managed to somehow avoid being shelved there.

The reasons for this, I assume, are to do with marketing and critical reception. Genre Fiction celebrates itself because all the works of Genre Fiction that have won major literary awards have been distanced from Sci-Fi or Fantasy or Crime by their authors. There is a perception of Genre Fiction as being niche, or popular within a certain audience. It cannot win, for it is both populist and niche simultaneously. So there is a stigma for Genre Fiction of being lowbrow and culty, as opposed to highbrow and selective. Then there is simply the fact that more people look at the Fiction Section than the Crime Section, so you want your book to get looked at more.

There are weird associations people have based on genre, shorthands and stereotypes that are propagated by a cyclical set of behaviours of authors and audience. If something is genre but popular, it gets assimilated as being representative. Hence all Dark Romance is brooding supernatural beings ploughing pale young whinos, and all fantasy is witches and wizards going on bloody long walks. Whereas you could quite easily say that The Time Traveller’s Wife sits comfortably in Dark Fantasy. Definitions are more fluid than the Genre Sections allow them to be.

Of course, there are simply books you like and books you don’t. But that’s more difficult to operate as a shelving system.

I mean, how would you deal with it? Would you rather your book be put in the Fiction section if it meant more sales? Do you think Fiction should just encompass all genres? And do you subscribe to the belief that there are just good and bad books, whether they be Literary Fiction or Crime Thrillers?

12 Books in 12 Months:
Before I started this project I didn’t particularly ascribe any of my story ideas to particular genres.  I tended to just write things and see how they came out.  And I think there are probably quite a few books out there where the lines between genres are a little bit blurred.
I suppose if it was up to me as a published author I’d want my books to be shelved in a way that would make people pick them up and have a look.  I’d like to be read by as wide an audience as possible.  But I know from my time working in a library that people do tend to stick to particular genres and indeed writers – if authors continue writing about the same character, so much the better.  It’s just occurred to me I maybe should have overlapped characters between the 12 books – that could have been quite good. Maybe when I get to second draft time!

In addition, depending on your mood, age and whatever, slightly clunky writing can be forgiven when you’ve got a good story on the go, as with Magic Kingdom for Sale, Sold by Terry Brooks.  And well written prose can be really dull – I struggled to get to the end of Arlington Park by Rachel Cusk, but there was nothing technically wrong with it and I’ve enjoyed articles written by her in the past, so I wouldn’t necessarily want to judge all her fiction on the back of the fact that one novel didn’t grab me.

What I hope to do is write engaging characters and storylines across all 12 genres, but I suspect that all 12 of my first drafts are more ‘fiction’ than genre fiction and will require a lot more research and tweaking to market them to fans of the particular genres.  And even then I suspect I’ll have got a few of them wrong…

Further questions from Edinburgh-based writer and tweeter Andrew Blair.  I have decided to answer these separately because they’re not really related in any way.

Have you been pleasantly surprised by your research into genre fiction? For example, has Dark Romance proved to be more than pale women kissing vampires?

Truth be told, I wasn’t expecting much from Dark/Paranormal Romance.  I rather thought that most of it had been churned out in a cynical manner to jump on the Twilight bandwagon, and as such I assumed that all such books would be full of unsympathetic teenagers and deeply misogynistic male role models.  My plan was to make the genre readable by imbuing it with my special brand of humour/Scottish realism.

However, I am pleased to report that my suspicions were overly cynical.  The PC Cast excerpts I found online, for example, were much better than expected.  I’d go so far as to say they were entertaining, which is more than can be said for Adventures in Forks as it is seldom known.

Having said that, the main thrust is pretty much pale women kissing vampires.

What do you think of the World Book Night coverage from the BBC, and its putting of Literary Fiction at the forefront?  You remember World Book Night, with Sue Perkins going around hairdressers in Edinburgh and asking people why they hadn’t read Dostoevsky…?

My decision to put off doing Literary Fiction until December was taken at least in part because that meant it was the furthest away.  Putting LitFic at the forefront of anything strikes me as silly, because it automatically alienates a vast section of the reading population who want something a bit more gripping than flowery prose about beautiful landscapes.

I’m not saying I don’t enjoy or appreciate Literary Fiction, but it’s hard going at times.  And I resent the suggestion you get from commentators on some of the programs the Beeb have shown that writing genre fiction means you aren’t as clever or as profound as a literary author – it’s more about storytelling priorities.  Personally, I can forgive a big of unpolished prose if the plot and characterisation keep me interested, whereas LitFic is all about form.

Just out of curiosity, as a writer and bookseller yourself, what do you make of the coverage?