I don’t read a huge amount of non-fiction. I think historically this has been due to a deep-seated belief that non-fiction = educational. I want my reading to be fun, and ‘being educated’ isn’t fun, it’s something you do because a teacher/government official says you have to. As it turns out, this is not the case. Knowing things is great, often useful – for instance when you go home for Christmas and are subjected to lots of trivia games.

Last year I made a bit more of an effort with non fiction, and it was pretty good to be honest. I’ll be trying to get through more this year, and I thought I’d share my top five so anyone else who tends towards dragons and whatnot can read them as well.

NB, these were all technically educational, but not in a ‘this is how to do long division’ way. They made me think, some of them made me angry, some made me laugh. All are worth your time.

Shrill: Notes From A Loud Woman

This is a very funny memoir from Lindy West, one of my favourite journalists. It looks at rape culture, nerdiness, race issues, family, friendship, and what it’s like to be fat and female. Now I’ve described it, not that shocking this one appealed to me, I suppose!

If you ever read West’s hilarious take on Love, Actually published by Jezebel a few years ago, then you know the tone. She’s irreverent and sometimes scathing, but also very warm and insightful. Her list of fat female role models made me laugh out loud several times. And her honesty discussing the online troll who pretended to be her dead father, and what happened next, was moving and fascinating.

Nasty Women is a collection of essays on what it’s like to be a woman living in the 21st Century. The editors decided to publish the book as a response to election of ‘very stable genius’ President Donald Trump, who famously called opponent Hillary Clinton a very nasty woman during his election campaign.

They ran a Kickstarter to fund it and smashed their £6k target within three days, putting out a call to Nasty Women everywhere to tell their stories loud and proud. Many of the authors in the collection are young and relatively unknown, and they write about all sorts of things – colour, sex, immigration, contraception, finding a voice online and more. The book is perhaps not as polished as something from a more heavyweight publisher, but that’s one of the things I quite like about it.

If you subscribe to George R.R.Martin’s very Pinterest friendly point ‘A reader lives a thousand lives before he dies’, this book gives you glimpses into twenty of them.

The full title of this book by YA author Juno Dawson is The Gender Games: The Problem With Men And Women, From Someone Who Has Been Both.

In it, Dawson makes the case that sex and gender are two different things. She posits that gender (and the expectations foisted upon you because of it) really messes people up, and it’s a compelling argument. The book is part memoir and part social commentary. It’s direct, occasionally very funny, and the cultural references were just right for me (Bucky O’ Hare, anyone?).

There were lots of moments when I thought I really ought to buy it for friends who are currently incubating small humans, as I think it could be helpful navigating the pink/blue divide. But just generally it’s a thought provoking book which everyone should probably read.

Before Nasty Women, there was The Good Immigrant – a collection of essays in which writers explore what it means to be Black, Asian and Minority Ethnic in Britain today. This was another crowd funded collection (via Unbound rather than Kickstarter) but it’s a bit more polished than NW and features some more high profile names.

I really enjoyed this. One piece that particularly stuck out was Darren Chetty’s ‘You Can’t Say That! Stories Have To Be About White People’ which really drives home the importance of proper representation in publishing and the media. The title comes from a comment made by one of his creative writing students.

Another that stuck out as someone who lives with a massive Doctor Who nerd was ‘Kendo Nagasaki and Me’ by Daniel York Loh, which describes being a Chinese kid at a nearly all white school when The Talons of Weng-Chiang was broadcast in 1977. When yellowface was a thing that happened on TV.

Some of the essays are funny, some are angry, all are powerful in their own way – and I would thoroughly recommend this to everyone.

Why I’m No Longer Talking to White People About Race 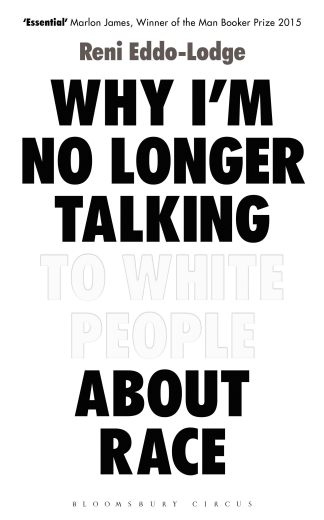 In 2014, journalist Reni Eddo-Lodge blogged about her frustration with the way that discussions of race and racism in Britain were being led by those who weren’t affected by it. The post struck a chord, and last year Eddo-Lodge’s book of the same title came out. It is brilliant.

It uncovers British black history that is rarely talked about and explains how structural racism works, about colour blindness, about complicity, and about how to move towards a system that is not totally borked. You can read quite a long extract in The Guardian which gives you a sense of it, but the short version is read it, read it now, it is so important and interesting and well researched and frankly written.