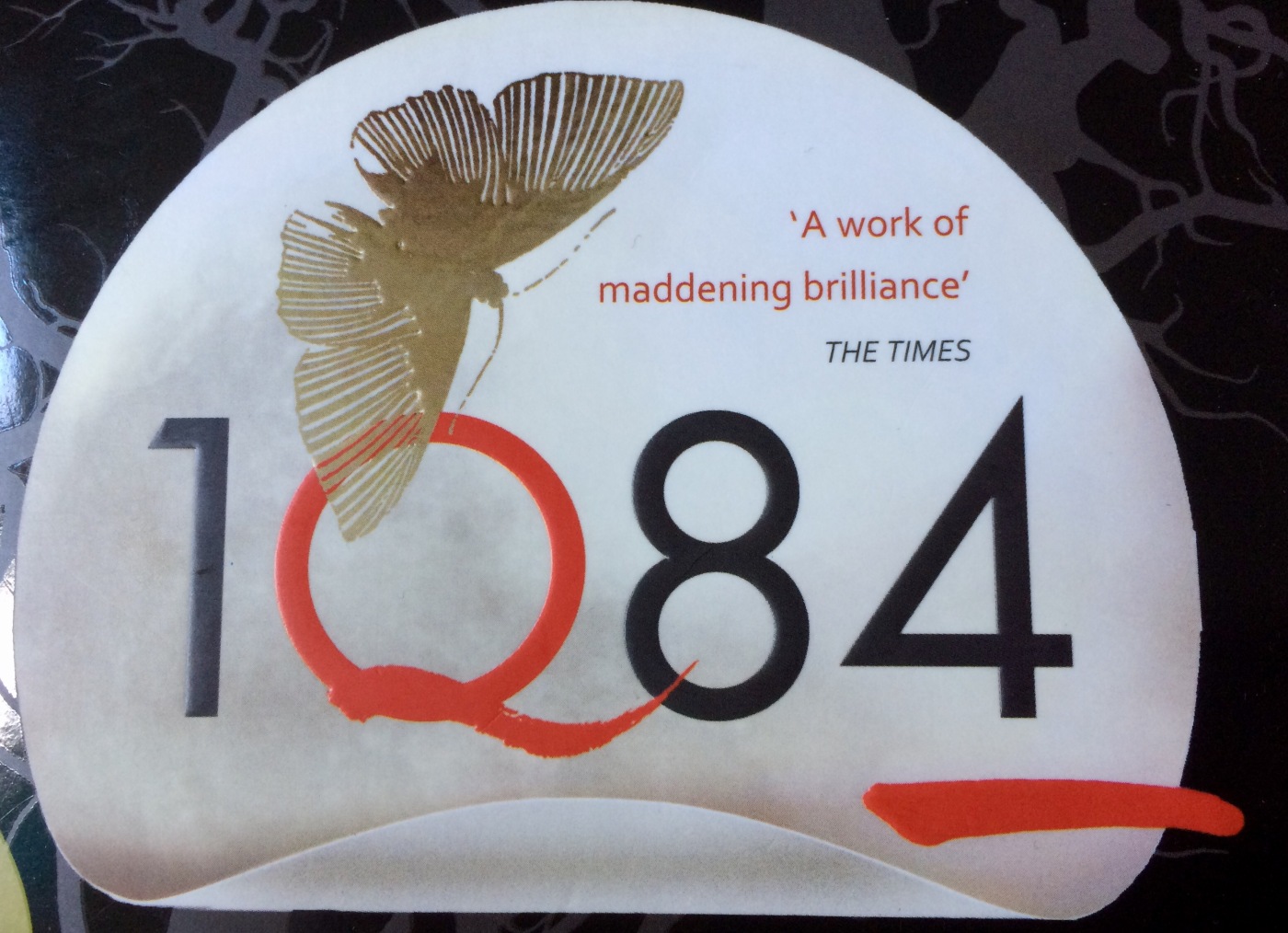 Today I will be talking about IQ84 by Haruki Murakami, a book I finished at half past midnight and have mixed feelings about. This blog post will contain **SPOILERS**, so if you haven’t read it and are planning to do so you may wish to bail. I would offer you this counsel before you head though: if you’ve never read Murakami before, maybe don’t start here.

First, a quick overview of what happens in the 1318 pages of my paperback edition of IQ84.

The book opens in spring 1984 with a character named Aomame stuck in a traffic jam in Tokyo. She gets out of her taxi and climbs down an emergency escape in order to try and catch a train to make her important meeting – but in doing so ends up in a world slightly skewed from the one she left. Aomame dubs this new reality IQ84, where the Q stands for question. Meanwhile the other central protagonist, Tengo, a maths teacher and aspiring novelist, is asked by his editor to re-write a manuscript by a teenage girl in order to win a literary prize.

As the story goes on it flips between Aomame, a fitness instructor and assassin in the employ of a vigilante dowager with a badass gay bodyguard, and Tengo as he learns the book he is re-writing, Air Chrysalis, which contains mystical beings and shiz, is not actually fiction. The characters within Air Chrysalis are peeved about it being public knowledge, they are the central belief point of a scary cult, and Aomame is charged with assassinating their leader.

Oh, also, Aomame and Tengo once held hands when they were ten and have been secretly in love ever since, even though neither of them has seen each other since then.

Based on that premise, this book ought to be largely awesome – or at the very least, the type of fiction I am into. Friends, I did not find it largely awesome. There are flashes of Murakami magic, and I persevered until the end, but I don’t know if I could recommend it to others. 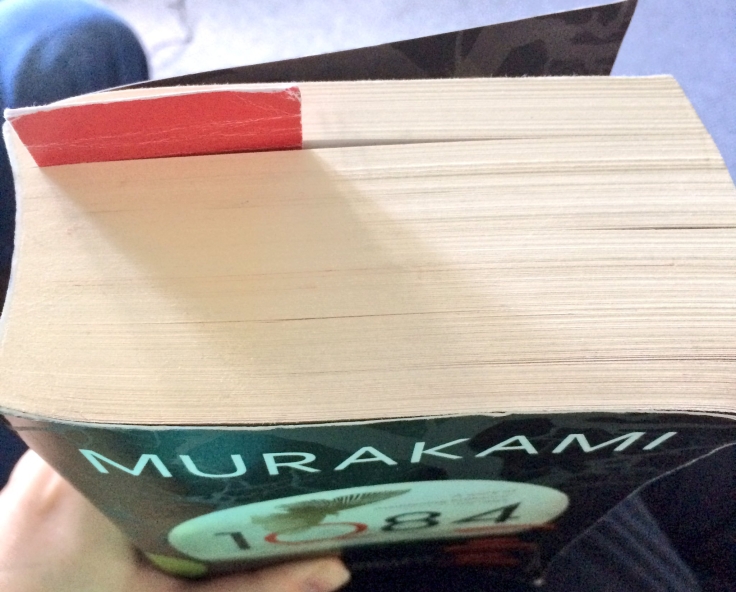 The writing style is the usual Murakami mix of simple, dry and occasionally poetic. As you might expect there’s also magic, cats, and some stuff about ears.

That last one also doubles up as a neat little bit of foreshadowing for what is to come.

However, there are also the hallmarks that you may or may not find annoying in Murakami’s prose, including a lot of repetition, and full-blown male gaze misery.

Now, I put up with the male gaze in the last Murakami book I read, Hard-Boiled Wonderland and the End of the World, because it was relevant to the character development. The narrator is supposed to be shallow and self involved, so his navel gazing over how he could possibly be attracted to a woman who is slightly overweight makes sense. He’s a blinkered thinker, but as the story progresses he gets over himself and starts to look outwards. It’s also presented in first person so you know that it is his thought process.

By comparison IQ84 has a third person narrator who seems to surmise that everyone in the world judges a woman boob-first, especially other women.

Here are a few of the descriptions of female characters.

Tengo definitely does not fancy Fuka-Eri, dear me no

A large component of the book is that Aomame and Tengo, although they sleep with other people, don’t generally get emotionally attached because they are star-crossed lovers. However, the constant repetition about how Tengo is in no way attracted to the ethereally beautiful Fuka-Eri does rather conjure up cries of ‘the lady doth protest too much.’ Particularly when he sleeps with her in a scene with a nipple description worthy of Rocky Flintstone.

I think what bugs me about all this is that here is a literary novel with some potentially cracking female characters, but they keep being undercut by lazy stereotypes. Aomame has had a crappy life, having been ostracised from her fundamentalist parents at the age of 11 and her closest female friend killing herself due to domestic abuse.

She gets through this and becomes an assassin, helping other victims of abuse get vengeance. She is periodically a badass, except for when she’s hung up on some boy she hasn’t seen in 20 years, worrying about how her boobs are too small, or pretending to be bisexual for the titillation of old dudes. You know what could have fixed this? Editing. More focus on the character, less on her fixation with the shape of her pubic hair (which she checks daily as part of her morning ritual, so we get to join her).

Aomame’s friend Ayumi has been a victim of abuse but has come out the other side a strong and independent young woman. She knows what she wants and is unafraid to go for it, whether it’s casual kinky sex or a career in the sexist police force. Except wait! The fact she enjoys sex (and isn’t just having it to kill time whilst waiting for the love of her life to reappear twenty years after she last saw him) leads to her being murdered. Calm down, Thomas Hardy!

Also, why does Aomame’s pal have to die for the cult to send her a message? They don’t kill Tengo’s pal Komatsu, they just kidnap him for a bit.

Fuka-Eri, author of Air Chrysalis (the book within the book) is quite weird and interesting and, very unusually for a 17 year old girl in fiction, pretty A-sexual. She has no social etiquette, has grown up in a cult and gone on to write a bestselling book about little people coming out of a dead goat. She’s genuinely not your average hormonal teen.

Yet every time she appears, we are reminded of her magnificent breasts. Later, she has sex with Tengo even though he (allegedly) doesn’t fancy her and she doesn’t fancy anyone. This takes place so she can magically transfer his sperm to Aomame to get her preggo at the behest of the mystical Little People. For me, this isn’t so much magical as it is just uncomfortable.

Another thing that bugged me about the way this was written was that some of the narrative was just clunky AF.

I’ve skimmed the surface of how the presence of all younger female characters is undercut by references to their epic (or not) bewbs, shapely legs and whatnot. But guess what – we’ve also got older women as witches! See, Tengo’s dying father is being cared for by three nurses of different ages, and that is enough to shoehorn a bit of Macbeth in there.

“Tengo wasn’t seeing the three nurses as evil beings. They were kind and straightforward women. They worked hard and took care of his father. Overworked, living in this small, less-than-stimulating fishing town, they were just letting off steam… But when he witnessed how the energy in these three women, all of different generations, was converging, he couldn’t help but envision the moors of Scotland – a gloomy, overcast sky, a cold wind and rain howling through the heath.”

FYI Tengo is having this thought in a karaoke bar. These three friends have taken pity on him because he is far from home and waiting for his sick father to die, so they’ve invited him to tag along on their monthly night out, taken him for dinner and tried to be nice to him. They’ve flirted a little, partly because they’re pissed and also because Tengo is apparently the most attractive man in Tokyo – but they’ve also been careful not to cross any lines since his dad is their patient.

In spite of all this, he can’t help comparing them to witches. Not positive, attractive, Hilda and Zelda from Sabrina the Teenage Witch witches, but the ones written by Shakespeare to impress a king who was instrumental in having hundreds of women murdered for witchcraft.

To add insult to injury, this whole segment is used to foreshadow something he has already been foreshadowing for most of the book. It’s clumsy, unnecessary, annoying, and frankly should have been edited out.

Having said all that..

There are some good bits in the book, which is why I persevered. That and one of my best friends loved it and every time we’ve spoken in the past two years she’s asked me whether I’ve read it yet.

Sure, it takes 750 pages before you get to find out what happens in Air Chrysalis, but when you do it’s magical and weird and engaging. The story of the cat town, which was mentioned in a lot of reviews, is another strange folkloric highlight.

The fact the main female character walked away from a shit life at the age of 11 and has been fiercely independent ever since is pretty great. I like the notion that she meets the elderly dowager who takes matters into her own hands to ensure battered women are kept safe at a self defence class. Watching Aomame try to piece together the world of IQ84 is interesting, and keeps you guessing. The supporting characters are a bit two dimensional but likeable enough, particularly Tamaru, Komatsu and Ayumi.

For me the love story is the weakest part, which is a pity because as you get into books two and three you do realise that it’s definitely the main theme. I’m not sure whether I couldn’t get behind it just because I don’t understand what’s so great about Tengo, a boob obsessed maths teacher who never goes out of his way to do anything for anyone. Possibly it’s just that his characterisation is symbolic for the wider male-gaze stuff that continually pulled me out of the narrative, and meant it took me 4.5 months to slog through the novel. As a speed-reader, this is a long time for me.

I wouldn’t say this is a bad book, but I do think the same story could have been told in half or even a third of the time. Although there were a lot of interesting things in there, a lot of them were thrown away so that in the end I found IQ84 oddly slight. For instance I’d like to spend more time with Air Chrysalis, or in the cat town, the books within the book – but instead we’re stuck with the romance between Aomame and Tengo (such as it is).

The TL;DR of this review is:

If you have read Murakami before and this is on your TBR, I’d be really interested to hear what happens when you spend a year reading only women writers before you embark on this one.

3 thoughts on “Mixed Feelings on IQ84 – A Book Review”