Not so very long ago I brought a thing to your attention, namely the intentions of writer, scientician and internet user The Rogue Verbumancer to begin a monthly writing challenge via his blog.  Every month he will post a picture, and every month The People of The Internet are invited to do a piece of writing around it, 1000 words or so in length.  My one for September will follow momentarily; but you should read the other entries too.  Only today Lord Verbumancer has linked to them all on his page.

Also before I post this, a disclaimer: I am so out of practice with short stories after all the novelling I’ve sort of forgotten how to do them – they generally read like a chapter from a book now.  I don’t think this one does, but I’ve been wrong before.  Captain Tact is the only other human to read it so far, and he pronounced it ‘weird’.  I’m not sure whether that is good, bad or indifferent.  If anyone has any further feedback, you know where the comments box is.

Anyway, here is my take on Grenade in the Rain. 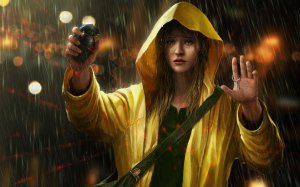 Her eyes are damp under the yellow hood, standard issue for women in her sector.  The plastic reflects off her pale skin, giving an impression of jaundice – or maybe she’s just  jaundiced.  Nobody is as healthy as they used to be.

Rivulets of water run down over her shoulders and the ends of her hair are damp, but her face is mostly dry – except for the eyes.  That means she’s conflicted.

If she’s uncertain enough, there might still be a chance.

“Fiona,” I croak helplessly, gesturing to the bloody mess of my knee in a bid to win some sympathy, “don’t. I won’t be able to run.”

She glances, disinterested, over the jumble of shrapnel and bone.  She shakes her head.

In a sudden, violent movement she raises the grenade in her right hand and goes to pull the pin.  I flinch then curl, adopting a dignified foetal position for my last few seconds on the planet; when her face splits in two and a huge cackle emerges from her cracked lips.

“Your face,” is all she can manage, her shoulders shaking with silent laughter, “the look on your face.”

I relax. Then annoyance surges through me and I try to jump to my feet, to run forward and throttle her, or hug her, or both… but the damaged leg feels like it’s on fire.  I slip uselessly on the cobbles, landing on my bad hip.  It explodes in sparks of pain that crackle over the backs of my eyelids.  This means I fail to notice the figure behind the yellow ghost in the rain.

It means I fail to issue a warning shout.

The grenade is still in her hand, so all the guard has to do is reach round her and pull the pin.  His face is obscured by the standard issue gas mask, but I’m sure he’s smiling under there.  The guards enjoy their work.

Fiona’s eyes meet mine in the split second before the blast.  They seem confused and hurt.  She thinks I signalled him.  She thinks I’ve betrayed her.

“I didn’t-” I begin to shout, before everything goes dark.

When I open my eyes, the cobbles have swapped themselves for a carpet of mossy stuff.  It might even be moss, I guess.  I’ve never seen any in real life.  A bright stream of sunshine hits my retinas and I swear in pain.  There hasn’t been this much natural light in decades.

I hear a giggle and turn my head to see Fiona sitting cross legged beside me.  She has a bunch of impossibly large daisies in her lap and is threading them together to make a necklace.

I’ve only ever seen daisies in picture books.

“I’m hallucinating?” I suggest thickly.  It wouldn’t be the first time.

I pull myself into a sitting position and double take at the sight of my knee. It’s totally healed, which is impossible.  I’ve seen people lose legs from hits that weren’t as severe as mine.

Fiona smiles and shakes her head.  I notice her fingernails are green from piercing the flower stems.  Green fingers, I think vaguely, that phrase was in the daisy book.  It was by some florist from Europe before the Amalgamation… Captain Titchmarsh?

I shake my head in an attempt to focus.  It’s hard, because mostly all I feel is a sensation of drowsy contentment.

I raise an eyebrow, about to come back with what would undoubtedly have been an extremely witty retort – but get sidetracked by the sight of a flash of white walking round what used to be the YWCA building. It now appears to be an orchard.

I narrow my eyes at my companion.  She has finished her daisy chain and is now wearing it as a crown, looking around for something else to do.

She flashes me that maddening smile again and pulls me to my feet.  I shout out, expecting my knee to crack in new and more horrible ways, pain pulling me out of the daydream… but it feels fine.  Good, even.

I take in a lungful of the unnaturally sweet air and fold my arms, trying to look stern.  She shifts uncomfortably from one foot to the other as I summon the severest of warning tones in my arsenal.

This always used to get her when she was little, because she knew I wasn’t above using underhand tactics to make her tell me things.  Chewing gum to the hair was particularly successful, but I’d always give her fair warning by using that voice.  I thought it was fair, anyway.

She stops bobbing about like a guilty child and suddenly looks directly at me.  I don’t know what she’s searching for but evidently she finds it in my face somewhere, because suddenly she takes my hand and drops something warm and metallic into my palm.  I realise with a start it’s the shell of her grenade.

I stare at it, uncomprehending.

She takes a step back and twirls around a few times, palms outstretched towards the perplexing array of flowers and trees and nature around us.  Apparently she’s enjoying herself because she keeps turning round and round, yellow hair and yellow coat billowing around her like sunshine.  She’s making me dizzy, so I decide to ignore her and inspect the shell more closely.

There are tiny scratches in the blue lacquer coating, as if someone has tried to prise it open with something sharp.  There was a time I’d have put the damage down to the fact the thing has recently exploded, but I’m not so green now.  I know the shell shouldn’t even exist after the force of that blast.

It’s more of a statement than a question, but she stops spinning and nods.  She tries to look at me, but ends up gazing over my shoulder, her pupils flicking from side to side, unfocussed.

“You rewired one of the most sophisticated pieces of weaponry the world has ever seen, and used it to make unicorns.”

She blinks, back to normal, and smiles at me again.

“I bet there are fairies as well, huh.”

Fiona shrugs, which I take as a yes.

“It’s better than all that rain and darkness,” she squeaks indignantly but I’m still shaking my head, incredulous.

“How long will it last?”

Fiona takes a sudden, almost aggressive interest in a sunflower that has just emerged out of nowhere.  I had no idea flowers grew so quickly, they’re shooting up all over the place – but now is not the time to learn about horticulture.

I fold my arms and try to look stern. “How long?”

“We-e-ll,” she says reluctantly, “I may have used the temporal equation powder.”

As if that would mean anything to me.

“It’s something the Prof was working on, but he hadn’t finished testing it.”  She is twisting her hair around her finger.  She always fidgets, but it’s more pronounced when she doesn’t want to tell you something.  “He seemed to think the effects were sort of… permanent.”

I roll my eyes heavenward in disbelief, catching a glimpse of something that looks suspiciously like a gryphon flying overhead.  She doesn’t look like a genius.  That’s what makes her so dangerous, I suppose.

“How far reaching is it?”

She grins, this time apologetically.

“I can’t say for sure,” she admits, “but its powerful stuff.  I’d hazard a guess it’ll spread across at least two continents.”

“Unicorns on the Zyathran Plain,” I groan, “they’re going to love that.”

“Nobody can trace it back to us.”

She snorts with laughter, quite rightly.  I’m eldest; it’s up to me to take responsibility.  If the Zyathrans get the red plague as a result of their proximity to unicorn hair, it’s on me.  Honestly, of all the things you can be allergic to…

In the distance the sirens start, a clawing sound that makes my teeth ache even though it’s still faint.  To my right I see another streak of white as a unicorn flees the noise.  She’s got the right idea.

Fiona raises an eyebrow.  It makes her look so much more like me.

“Come on mum,” she says, “there’s no need to be melodramatic.”

She takes my hand, and I close my eyes.  Using her teeth, my genius, dangerous offspring gently pulls the pin out of the second grenade.

Then everything goes dark.